Ukraine has been in the headlines for all the wrong reasons over the past three years.

Since Russia launched covert military operations in the east of the country, seizing Crimea and occupying parts of the Donbass region, the economy has been severely disrupted.

As many as 3,000 lives have been lost in the fighting to date.

However, the real story has been taking place away from the front line.

President Petro Poroshenko, elected following the Euromaidan protests in 2014, has been gradually righting the economy, tackling corruption and seeking closer ties with the European Union.

Tangible signs of recovery can now be spotted.

Visa-free travel for Ukrainians heading to the EU, for example, arrived last month, with tourists and business travellers quick to take advantage of the new opportunities.

In Ukraine, and capital Kiev in particular, the mood is of cautious optimism.

Cranes dot the skyline above the city, with the new construction evidence of a returning confidence.

A more stable exchange rate - with 33 hryvnia currently needed to buy a British pound – has brought inflation down, with a level of over 12 per cent seen in 2016 falling to below six this year.

Economic output is also increasing for the first time in five years.

Growth of two per cent was recorded last year, and is expected to rise to 2.8 per cent this year, and head toward three per cent in 2018.

This has been made possible primarily through international financial support, largely in the form of a $17.5 billion IMF loan facility.

Funding has bought the country time to adjust to its new role in the world economy – and the long-term outlook is increasingly positive. 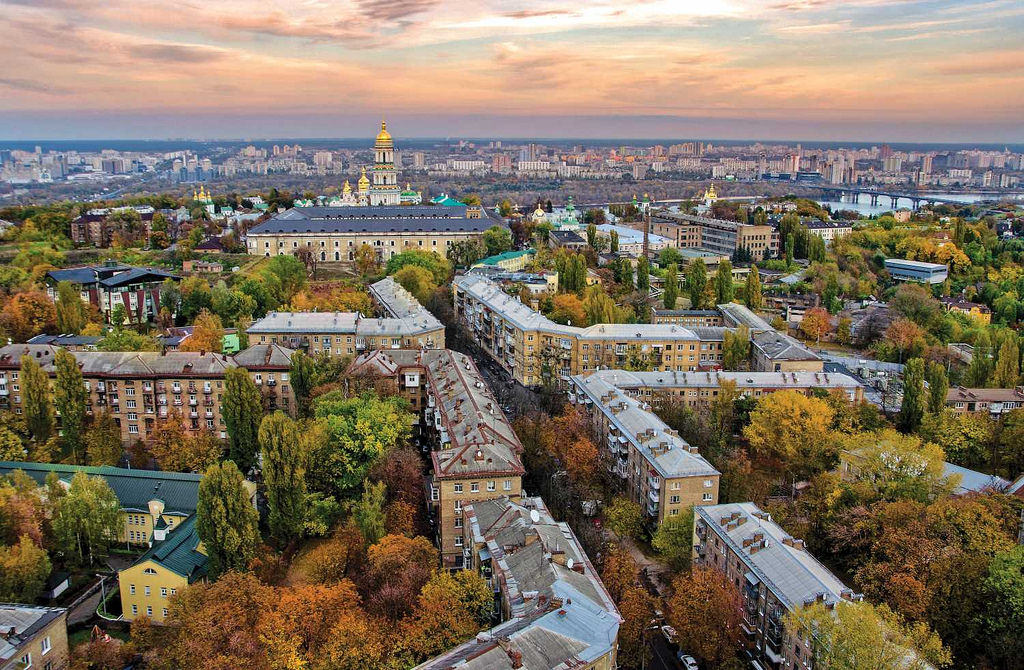 Hospitality is one area that has quickly recovered, with private investors taking the plunge and opening new hotels, again focused on Kiev.

Although visitor numbers remain well down from peaks seen in 2013, some 13 million travellers arrived last year, a sharp increase on 2015.

Ukrainian tourism has been forced to diversify away from the Russian market, attracting travellers from further afield, with new markets opening up.

Qatar Airways has become the latest carrier to launch flights to Kiev, for example.

As a result, visitor numbers are expected to rise again in 2017.

Events, including the hosting of the Eurovision song contest in May this year, have also shown the country is open for business, while tour operators have been tentatively returning. 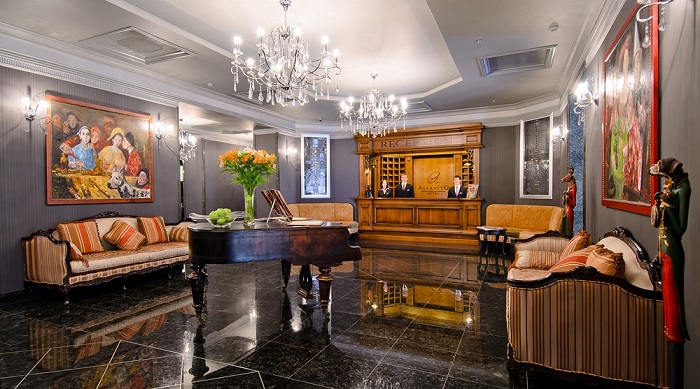 A stately welcome at the Alfavito Hotel

Well placed to benefit from this influx of confidence and visitors is the Alfavito Hotel.

Situated minutes away from the main thoroughfares of the city, the Olympic Stadium and central Maidan Square, it is right in the heart of the action.

Visiting in July this year, the property is quiet, but in a stately, refined manor.

A baby grand piano graces the lobby, while exquisite chandeliers hang from the ceiling.

Art, and in particular music, are the main focus here.

While I was in town the Atlas music festival was taking place, with headlining artists from the festival checking in just ahead of me.

Upstairs, the walls are lined with signed images of the stars that have stayed in the hotel over the years. 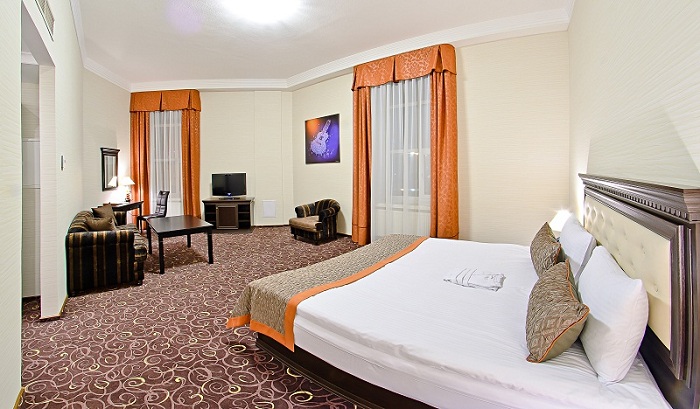 There are 229 rooms at the Alfavito Hotel, including in the superior double category

Check-in is quick, exceedingly polite, and without fuss I am shown to my room.

Space is the key asset here at Alfavito Hotel.

Although opened in 2012 - in time for the UEFA Euro 2012 championship – the hotel harkens back to a grander age of travel, when guests, rather than stringent economy efficiency, came first.

The huge rooms are bright, comfortable, although a little Spartan, and come equipped with all the amenities expected by international travellers. 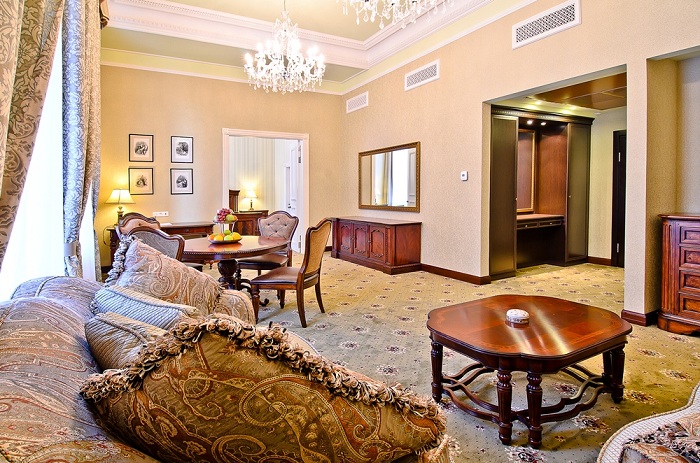 Luxurious suites at the Alfavito Hotel

If you have a little more cash to splash, check out the Oscar Apartment – the pride of the hotel.

With a spacious entrance hall, private dining room, living room, and large bedroom with a double bed, it is a huge space in a majestic style.

Ornate furniture provides a great place to relax, while the polished dining table, full bar, and gorgeous bathroom (filled with Chopard products) give a real air of luxury.

Guests looking to invite friends can also call on the hotel chefs to come and prepare private meals – a real treat.

Is it hard to think of a better place to entertain in Kiev! 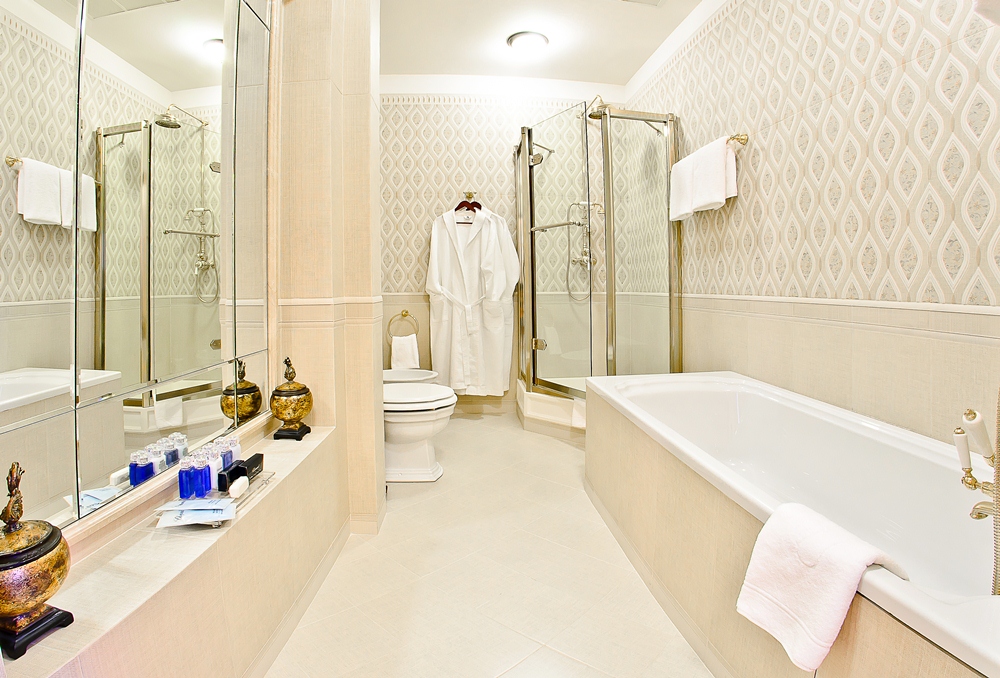 Chopard products come as standard in the Alfavito Hotel’s suites

Back downstairs and the Piano Bar is open 24-hours a day to guests.

Seating up to 130, the location serves gourmet international dishes and local Ukrainian specialties.

A superb adjoining terrace also welcome guests, whatever the weather.

Across the hall, the Forte Café-bar is home to specially created pieces from Ukrainian artists, not to mention the occasional jazz concert from noted singers.

Business travellers will find the in beautifully designed conference rooms an ideal location for conferences of all sizes.

Larger parties can also arrange for a lingering banquet with a selection of appetizers, delicate finger foods and grand aperitifs.

The beautiful blend of business and pleasure makes the Alfavito Hotel one of the best places to stay in Kiev. 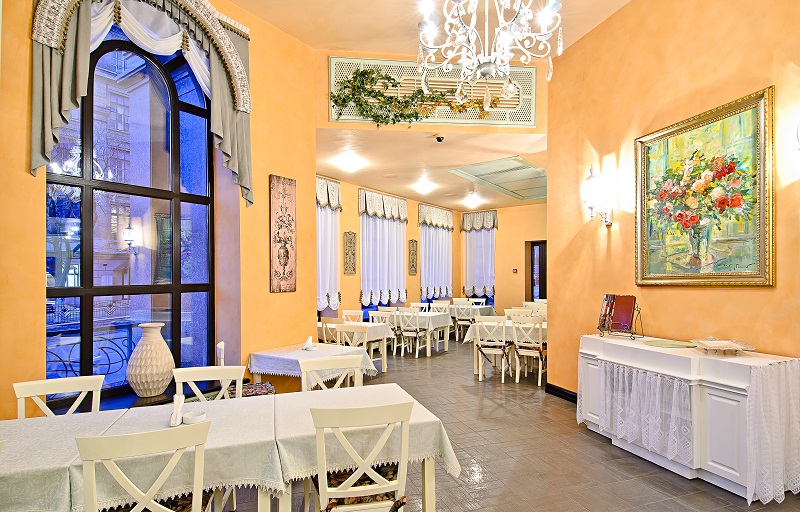 The elegant four-star Alfavito Hotel is located in one of the business districts of central Kiev next to the Palats Ukraina underground station.

The property is within 15 minutes’ walk from the central main street, Khreschatyk, and Maidan Nezalezhnosti, while it is only ten minutes’ walk to Olympic Stadium.

The hotel offers 229 comfortable guest rooms, including rooms in the standard and superior groupings, as well as the VIP deluxe, suite and apartment categories.