Norwegian’s first 787 Dreamliner has touched down at Oslo Airport Gardermoen ahead of launch into service.

“It’s fantastic that we have taken delivery of our very first Dreamliner and that it can finally enter into service,” said Norwegian chief executive Bjørn Kjos.

Director of flight operations Norwegian Long Haul, Torstein Hoås, and one of Norwegian’s new 787 captains, Fredrik Lambeck, brought the Dreamliner back to Oslo from Seattle – a journey that took eight hours and 20 minutes.

“We would like to congratulate Norwegian with this fantastic new aircraft, which already has led to several new routes overseas from OSL.

“We are looking forward to working together with Norwegian so we can get even more new routes with the Dreamliner from OSL,” added Oslo Airport Gardermoen managing director Nic Nilsen. 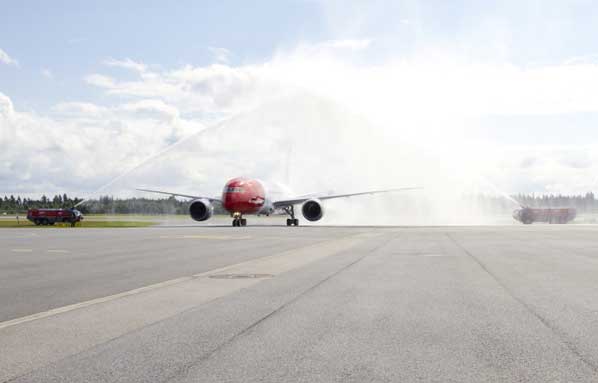 Before the aircraft enters into long-haul service to New York and Bangkok, the Dreamliner will operate on several European routes this summer.

This means that scores of passengers will be able to enjoy the comfort of this brand new aircraft.

The selected routes are between Oslo and London, Alicante, Malaga, Nice and Barcelona from July 4th to August 4th.