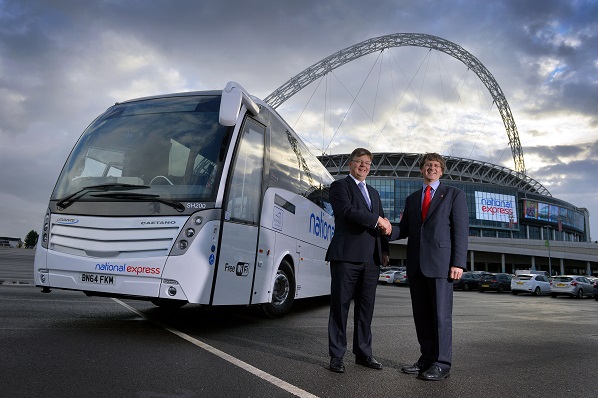 National Express has consolidated its position as the premier provider of affordable event travel following a major new deal with Wembley Stadium.

The UK’s largest coach operator and Wembley Stadium have signed an agreement which sees National Express retain its place as Wembley’s Official Travel Provider for the next four years.

News of the deal is likely to be welcomed by sports and music lovers alike, with fans benefitting from the choice of up to 55 departure points and direct coaches that drop off in the shadow of Wembley’s arch, at the official Wembley Stadium parking area.

National Express and Wembley Stadium have enjoyed a relationship spanning back to 2007 when the world-famous redeveloped stadium was unveiled.

In that time, hundreds of thousands of fans have used National Express coaches to travel to Wembley Stadium, with the car park lit up with the firm’s instantly recognisable white, blue and red vehicles on event days.

National Express coaches, which each take up to fifty car users off the road, also play a key role in helping Wembley meet its environmental targets and the stadium encourages people where possible to travel by public transport.

Coaches also benefit from priority routes which give them the green light to exit the stadium ahead of cars.

Recent highlights of the relationship include One Direction’s ‘Where We Are’ tour which, in terms of night-for-night coach tickets sold, is the biggest selling gig of all-time and the fastest-selling of 2014.

And, with the stadium, which is home to the England Team, regularly hosting other major sporting events including FA and Football League fixtures, regular season NFL games and high-production music concerts, doubtless the best is yet to come.

Tom Stables, managing director National Express UK Coach said: “Over the past seven years we’ve enabled hundreds of thousands of people from all over the UK to enjoy Wembley Stadium, that great modern amphitheatre which sets the stage for the greatest sporting dramas and seminal music events.

“We’re really proud to play a part in the Wembley experience and it’s with great pleasure that we continue our relationship and enable people to create the memories of a lifetime, from goals to encores, for years to come.”