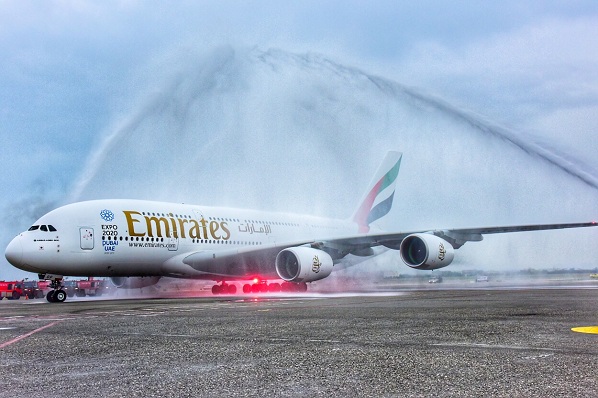 Emirates expanded their network of destinations served by its flagship A380 aircraft with the launch of new scheduled service to Taipei and Prague, reports Phil Blizzard in Dubai.

In doing so Emirates are the first and only airline to operate an A380 into these two cities, making the total number of destinations served by Emirates’ iconic A380 to more than 40.

The first A380 service from Dubai to Taipei landed at 16:50 local time on May 1st and the second A380 service launched on the same day landed in Prague at 13:25 local time.

Both aircraft were greeted by traditional water cannon salutes, along with special ceremonies at the arrival airports.

Emirates has grown demand for its services on both routes and together with the increasing popularity of the Emirates A380 experience among customers, the airline made the decision to deploy one of its fleet of 77 A380 aircraft on each route.

Taipei was introduced as a daily Boeing 777 service on February 10th 2014 and Emirates has since transported nearly 450,000 passengers between Taipei and Emirates’ Dubai home.

“Taiwan is a significant market for Emirates and we have witnessed a strong and steady growth in demand since our start of services in 2014.

“We are committed to cultivating the market through continuous investment and we are confident that the launch of our new A380 service will open up further opportunities in business and tourism between Taiwan and other countries,” said Thierry Antinori, Emirates executive vice president and chief commercial officer.

Taipei was introduced as a daily Boeing 777 service on February 10th 2014 and Emirates has since transported nearly 450,000 passengers between Taipei and Emirates’ Dubai home.

For Taiwanese travellers, flights EK366 and EK367 will be served by the new two-class configuration offering a total of 615 seats: 58 in Business Class and 557 in Economy Class.

Thierry Antinori told Breaking Travel News: “We are pleased to add Prague to our list A380 destination cities and introduce our innovative, best-in-class on-board product and renowned service to Czech customers.

“Czech travellers now have more opportunities to connect seamlessly with Emirates’ 150-plus destinations around the world, through one single stop in Dubai.”

The Prague-Dubai route was launched on July 1st 2010 with a daily A330 service and Emirates has since carried over 1.1 million passengers between the two cities.

The Emirates Dubai-Prague-Dubai route operates as EK139 and EK140, served by an A380 aircraft with a three-class configuration. Passengers will be accommodated in 429 spacious Economy Class seats on the main deck and with 76 fully flat-bed mini-pods in Business Class on the upper deck, along with 14 First Class Private Suites.