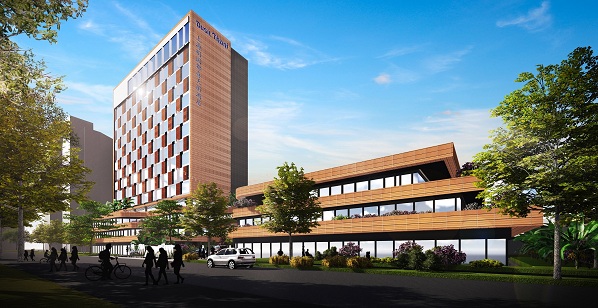 In agreement with Mingyuan Group, Dusit Fudu will bring a luxury Dusit Thani hotel and a serviced residence under the Dusit Princess label to the Shanghai market.

Dusit Fudu Hotels and Resorts management company now has more than 15 projects under its belt.

The addition of a further two projects in Shanghai marks a significant milestone in Dusit’s strategic expansion plan in China.

The deluxe Dusit Thani Hotel, Shanghai Zhabei will offer 215 guest rooms and suites as well as a conference centre.

Situated close to the Life Hub @ Daning business and lifestyle complex, the new hotel will also offer two restaurants, a Lobby Lounge, a rooftop swimming pool and a pool bar for guests and local residents to enjoy.

The hotel’s location in the up-and-coming commercial centre of Zhabei District puts the hotel within easy reach of Pudong International Airport, Hongqiao Airport and a high-speed train transportation hub.

The Dusit Thani Hotel, Shanghai Zhabei is scheduled to open in early 2019.

Slated to open in the summer of 2016, the Dusit Princess Serviced Residence, Shanghai Xuhui is conveniently located in Xuhui District, a prime commercial and tourist precinct.

The area is also home to the headquarters of many international companies.

The Residence will offer 112 apartments, ranging from 36 to 78 square metres, with an all-day dining restaurant, an indoor swimming pool and a health club to complement the guest experience.

“We are thrilled to manage two properties in Shanghai, this being the largest city in China and a globally significant financial capital,” said Lim Boon Kwee, president of Dusit Fudu Hotels & Resorts.

“Dusit Fudu was created to bring the hallmark gracious Thai hospitality pioneered by Dusit over 65 years ago to the Chinese market.

As we have grown to cover 15 cities throughout the country, we are proud to have not one, but two projects in Shanghai to demonstrate the significance of the Dusit brand on a growing scale,” he concluded.