Kicking off the 26th Caribbean Marketplace, the president of the region’s hotel association is again talking about “one Caribbean, one voice.”

Reiterating the words of Vincent Vanderpool-Wallace, head of the Caribbean Tourist Organization (CTO)  the president of the Carribean Hotel Association, Berthia Parle also talked about a “new era” for the region’s tourism industry.

Parle was opening the Marketplace in San Juan, Puerto Rico on Sunday night on an upbeat note.

Air traffic to the region is growing at eight percent a year, low-cost carriers are booming and there is unprecedented airlift, while tourist arrivals are up by five percent. 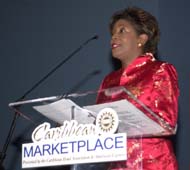 A total of 14 national heads of tourism from the region are attending the event, highlighting the importance of Caribbean Marketplace and the role it plays in the industry.

Terestella Gonzales-Denton, director of the the Puerto Rico Tourism Company, also weighed in on the “One Caribbean message.”

“People are different in culture, but similar in history, they have the same dream—to strengthen the appeal of destinations,” says Gonzales-Denton. 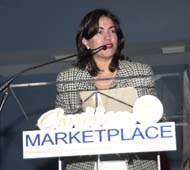 “We are not a competitor, but a neighbour.”

The speakers noted the fact that the region has a host of new airports, a brand new convention centre in Puerto Rico and that Wall Street is now looking to the Caribbean region for investment.

Parle went on to highlight the fact that 2005 was an “interesting year” with Hurricane Wilma, unsteady bookings, a fragile consumer confidence index and imminent danger of new passport rules by the U.S. and that the poor summer season was preceeded by a strong winter.

For a virtual tour of the Caribbean Marketplace and exhibition click here and scroll down.

For photos of the Caribbean Marketplace and Puerto Rico, find out more here.