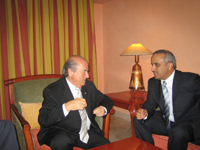 Ghaith al Ghaith, Emirates’ Executive
Vice President Commercial Operations Worldwide, met with Joseph S. Blatter,
FIFA President, at the FIFA Congress in Marrakech earlier this week.
Emirates is as an Official Partner of the 2006 FIFA World Cup in Germany and
with the event kicking off in less than a year this was a perfect
opportunity for the two men to discuss the event.Ghaith Al Ghaith took the opportunity of this meeting to discuss with the
FIFA President the possibility Dubai hosting future FIFA meetings and
events. Dubai has an excellent infrastructure and facilities to host both
conferences and sporting tournaments and so is a perfect destination for
future FIFA activity.

Emirates is the first airline to become an Official Partner of the FIFA
World Cup, and the airline hopes to see many passengers from around the
world travelling through Dubai on their way to the games in Germany.

Ghaith al Ghaith said: “Emirates is very proud to be a sponsor of the 2006
FIFA World Cup in Germany and by transporting people from across Australia,
Asia and Africa to Germany we hope very much to showcase Dubai to a new
audience of both business and leisure travellers.
——-