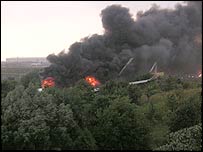 An Air France Airbus A340-300 plane has skidded off the runway and burst into flames at Toronto’s Pearson airport, but all 309 people aboard survived, say officials. Flight 358 from Paris burned for more than two hours after the crash landing in bad weather at 1603 local time.

The accident took place in very heavy rain near Highway 401, one of Canada’s busiest motorways, and emergency vehicles raced to the scene. Due to recent weather conditions the services were on high alert. The accident was the first major crash of an Airbus A340-300 since the model’s first flight in October 1991.

Passengers have told how they feared that the plane would explode but in the end only 24 people aboard the plane were treated for minor injuries. Witnesses said they thought the plane had been struck by lightning as the power went out just before the plane landed. The plane crashed through barriers and fell into a small ravine, tail in the air. It overshot the runway by some 200m. All the passengers were evacuated before the plane was heavily damaged by fire.
——-