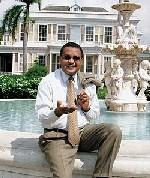 The 13th Annual Red Stripe Reggae Sumfest will feature a stellar line-up of artistes appearing at the Catherine Hall Entertainment
Complex in Montego Bay from July 17-23. This week-long festival is one of Jamaica’s biggest annual music events, and features spectacular performances of the indigenous Jamaican music form, reggae.
First staged in August 1993, Reggae Sumfest immediately became a hit with both locals and visitors, and quickly grew into the world’s premier reggae music event. The festival name was changed in 2001 to “Red Stripe Reggae Sumfest” when two major reggae promoters, Summerfest Productions and Red Stripe, forged a partnership.

The Director of Tourism, Paul Pennicook commented on the Jamaica Tourist’s Board (JTB) sponsorship of the event.

“The JTB has always believed that Red Stripe Sumfest is an integral part of Jamaica’s cultural calendar. Each year, Sumfest showcases the rich and varied musical talents of the island and the JTB has always supported this stellar event. We are more than pleased to once again be a major sponsor of the event.”