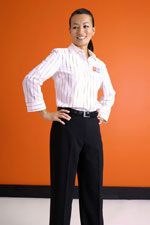 Australian Airlines this week unveiled a new uniform for its 310 flight attendants. Ochre, is still the signature colour of the crew uniform which is expected to be introduced in time for the airlines’ third birthday celebrations in October.
Australian Airlines Chief Executive Andrea Staines said the design brief was to update the uniform so that it reflected the airline’s position as an established full-service carrier in the Asia Pacific region.

“The most distinctive feature of the new uniform is the white shirt with ochre dots in a wave pattern in keeping with the unique design of our aircraft livery.

“We are moving from a desert sand coloured bomber jacket to a smart casual black jacket and trouser suit featuring our unique logo,” Andrea said. “The new uniform is an important investment for Australian Airlines as our flight attendants are the face of the airline.”
——-