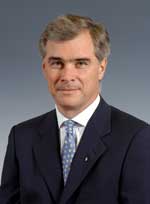 Symon Bridle has been appointed chief operating officer of Shangri-La Hotels and Resorts. In this new position, Mr. Bridle will supervise the hotels’ vice presidents to ensure optimal operational and financial performance among existing and opening hotels, as well as represent the management company to owners and shareholders. He will report directly to Chief Executive Officer and Managing Director Giovanni Angelini.
“When Mr. Bridle joined us in 1990, we had 14 hotels in Asia; today that number has more than tripled to 47 hotels in Asia Pacific and the Middle East, with another 40 hotels in the pipeline, including North America and Europe,” said Mr. Angelini. “Mr. Bridle will continue to play an invaluable role in spearheading product and service excellence, profitability and customer satisfaction.”

For the last two of his 15 years with Shangri-La, Mr. Bridle was a group vice president responsible for hotels in Australia, Beijing, Dubai, Fiji, Hong Kong and India as well as new hotel projects in India, Oman and the Maldives. Previously he was group director of operations. He has held general manager posts at Island Shangri-La, Hong Kong and Far Eastern Plaza Hotel in Taipei (now Shangri-La’s Far Eastern Plaza Hotel, Taipei).