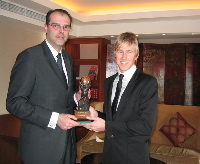 Established in 1993 to acknowledge and celebrate excellence, the world travel award is the highest honor in the world’s travel and tourism industry. “With thousands of votes cast by travel professionals from more than 200 countries, winning a world travel award has become one of the highest accolades a travel product could ever hope to receive,” said Graham Cooke, Chairman and Founder of World Travel Awards. “This really is a collection of the best of the best.”

In keeping up with their status as China’s Leading Hotel , The Peninsula Palace has launched several new initiatives this year, including a selection of special tour programmes for guests who want to explore Beijing. The Peninsula Academy programme features cultural activities introducing the lesser known aspects of Chinese culture and traditions in and around Beijing.

Additionally, last month, the first Peninsula Boutique in The People’s Republic of China opened in The Palace, offering a wide range of food and gifts items, including the celebrated Peninsula Chocolatier range of chocolates, Peninsula Tea blends, cookies, Champagne and wines, together with a selection of Peninsula silver items.

The concept of the new Peninsula Boutique at The Peninsula Palace Beijing was developed and designed by Hong Kong based design firm Chhada Siembieda Leung Ltd, Shanghai.