With the abundance of development and investment opportunities for hotel expansion throughout the Middle Eastern region, the Arabian Hotel Investment Conference (AHIC) sought to tackle several issues facing the region and to provide a platform for industry leaders to meet.
The Conference Programme included Plenary Sessions, Breakout Sessions and Workshops. Topics included industry and financing trends, local versus international brands, construction challenges, mega developments, environmental challenges, country breakouts and many more issues developed from an advisory board of 40 industry leaders.

At the end of the conference, Jonathan Worsley, Conference Chairman and Organiser, AHIC told BTN: “Our objective for this conference was to create an industry conference for the region and to allow the industry to participate at the highest level from all areas of the industry. We have had a great mix from all sectors and globally and I think there is potential to take this forwards next year. We were sold out with a waiting list so there is obviously a demand for this type of conference”.

Co-organiser, Edmund O’ Sullivan, Editorial Director, Meed commented: “We have had two tremendous days attended by more than 500 delegates and a series of superb presentations by experts internationally and regionally and it’s provided an opportunity for developers in the region with great ideas like Dubailand to expose what they are doing to a very demanding but a very responsive audience and a series of highlights that include the presence of the Chairman of Emirates Airline, we also had the Chairman of Kingdom Holding, HRH Prince Waleed, a man who controls a national fund of 23 billion dollars and he is one of the biggest institutional investors in hotel management companies. He received a Lifetime Achievement Award. In the audience we have had Chief Executives from some of the biggest hotel operation companies in the world and participants from all sectors of the industry. It’s been a wonderful two days.

Developing an iconic tourist attraction is the key to winning a permanent place on the global tourism map, but future success is dependent on achieving the right mix of local and international leisure trends, according to Salem bin Dasmal. Bin Dasmal, the CEO of Dubailand LLC, participated in a panel discussion during the conference. BTN caught up with him after to find out his thoughts on the event: He commented: “I have only attended today but the feedback from my team is that the conference has been out of this world - they met the who’s who of this industry. They developed contacts and we are really hopeful because our mandate is to attract the message of Dubailand and they have seen a lot of hotel developers who are really interested in developing hotels not only in Dubai but particularly in Dubailand, so we are excited about that prospect. I attended today and spoke and the audience was fantastic. The moderator was also fantastic and I really enjoyed doing the panel”. Commenting on his Dubailand, Salam said: “Dubailand is going to be spectacular - it is where dreams come true”.

As the only Caribbean destination attending the AHIC, BTN caught up with Hon. Michael E. Misick, LLB, Chief Minister, Turks and Caicos Islands, to gage his thoughts on the event. “First we are here to promote Turks and Caicos as a safe place to invest in the hotel sector. Secondly there is a buzz about Dubai and all the development that are taking place - as the Minister who is responsible for investment in tourism as well as Chief Minister - I wanted to come here first hand and see what is happening and see whether we can learn from their experience. Turks and Caicos is an upmarket destination. We are not interested in mass tourism and we want to see what is happening in Dubai - we are very impressed with the investment here and what is happening”. He added: “I think the AHIC has been a success. I would certainly like to congratulate the organisers on what has been a well planned event”.

InterContinental Hotels have three hotels in Dubai and are in the process of building new hotels for Dubai festival city which will be opening in 2007. They are on the verge of signing three new projects which will be on the beach and see great potential for the Holiday Inn brand. InterConti perceive Dubai to be a key destination to launch their budget brand.

Commenting on the show, Denis Johnson, Vice President Sales and Marketing Middle East and Africa revealed: “I think they have made a splendid effort for their first show here in Dubai. The reason we are here is to try and meet possible future hotel developers and this is a great opportunity for us to meet with brands and to talk about bringing our brands into their portfolio”. Commenting on Dubai as a destination, Denis added: “It’s a cliché to say that Dubai is leading the way in the Middle East - there is no question about that and every year, people say to us that there will be an over supply of hotels in Dubai but occupancy has never been so high. Occupancy levels for this year are going to be in the high 80% year round. So demand is going to keep up with supply and I see that happening”.

Shangri La is a relatively new operator in this part of the world. with 2 hotels operating in the region. Symon Bridle commented: “We obviously look at the region as having potential as do the people attending the conference so for us this is a great opportunity to network and see what’s going on within the Middle East region so it really gives us some insight into how people are looking at the region going forwards”. Shangri La have several new openings in the pipeline. Simon commented: “We are opening in Muscat at the end of 2005 which is a 680 million resort in which is 3 hotels are integrated into one complex. We will be opening a dome in 2007. We have another couple of projects in the pipeline in Dubai which is still a very expanding market. We are also looking at other opportunities in Abu Dhabi, Beirut and Kuwait”.

Le Meridien has nine hotels in the UAE and 32 hotels in the region. They are about to open a new upmarket hotel, The Grosvenor House which will be located minutes away from their other 2 properties in Dubai. 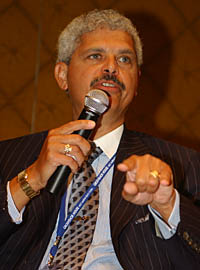 Russel Sharpe, Senior Vice President Sales & Marketing, Middle East & West Asia commented: “The conference is prior to ATM so the timing is really important and adds value. When the organisers decided that they wanted to do this they chose Dubai because of the massive developments. So this is coming at the right time - we are looking at a professional set up that they can build on next year.

“There are several people coming with different expectations. Some are looking to learn and find out about new trends. Hotel investment is going to bring a return not unlike some of the other destinations where they have been investing large sums of money - so it is important to get a perspective before you invest your money”.

Russel was pleased at the prospect of le Meridien hotels being purchased by Starwood, following breaking news last week that Starwood has signed a letter of intent agreement to purchase le Meridien brand.  He commented: “Lets hope they do. Today we are looking for a pocket to align - and preferably a deep pocket! We have had a number of owners who have appeared in time and unfortunately some of them have not been very good”. He does foresee changes to the brand if the acquisition goes ahead:  “There will have to be a number of changes if the acquisition takes place as we will be a big part of a bigger umbrella. I think the brand Meridien is big enough to stay not only as a brand but also to expand so it’s a double edged sword”.

Dates and location of next conference will be announced on the AHIC website once confirmed. www.arabianconference.com
——-