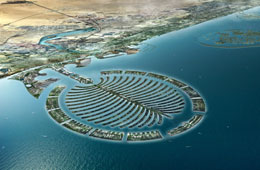 Nakheel’s recently launched and exciting project, The Palm, Deira had risen above sea level and is now visible from the air. The land mass now stretches from the Deira coastline out into the Arabian Gulf by 500 metres.
Sultan bin Sulayem, Executive Chairman of Nakheel, during an official visit to the project site, “The reclamation of the largest ever man made land mass in the Arabian peninsular and the largest in terms of material volume in the world is truly a sight to behold, particularly as the project has already risen above sea level and its defining features are taking shape. The teams of experts, including international marine specialists, Nakheel engineers, professional contractors, such as Van Oord that have been working 24 hours, 7 days a week, are so dedicated and driven that we are already ahead of the development schedule and this incredible task will certainly be completed prior to our initial programmed timetable,” he explained.

While watching the initial three Van Oord dredging boats working on the reclamation which creates the footprints of the island, building upwards to be visible above the water level, he continued “I am proud to say that the reclaimed land by the Dubai Creek will also be completed ahead of schedule thanks to the commitment of these gentlemen. This of course will greatly enhance the area in the near future.

The ambitious timetable for completion requires a round the clock team of contractors who will be reclaiming land from a depth of 10 metres, stretching out 14 kilometres from the waters edge. Commenting on the enormity of the task ahead, Van Oord said that, “Through our past experiences on the reclamation of both the Jebel Ali and the Jumeirah Palm projects, we have garnered much experience and are able to streamline the process so that we can accurately estimate the time to reclamation completion. We have been working on this project since August 2003 and find that we are already delivering ahead of schedule and this is partly due to the readily available materials from around the Emirates. We are currently working with three vessels and will be increasing our dredging ships to eight in the coming months. We now can see over 55,000 square metres rising above the water, but this is only a very small percentage of the reclaimed island development that lies below sea level”.

The Palm Deira is one of Dubai’s most prestigious and ambitious projects to date, extending the Deira coastline by over severalÊ 100 kilometres, the project will ultimately offer dream homes to thousands of people in the Deira vicinity when completed. The Palm Deira was launched as the final chapter of The Palm developments because of the importance Deira has played in the history of Dubai, “It only seemed fitting that Dubai’s trading hub started within Deira, and now The Palm trilogy will be completed there too. It has always been important for Nakheel to ensure that Deira shares in the fantastic vision of The Palm, created by HH Sheikh Mohammed bin Rashid Al Maktoum, Crown Prince of Dubai and UAE Defence Minister. And it is The Palm, Deira that will complete and become the marina, shopping and social hub around the Dubai Creek in the future,” Sulayem added.

Empahsising the role and presence of marine environmentalists at the project site, he commented that “As has been proven earlier at Jumeirah and Jebel Ali, not only will the new Palm here in Deira override any ecological concerns, but moreover, will actually support new marine life and create ecological wonders”, adding that the sound environment protection was one of the driving factors at the project site.
——-