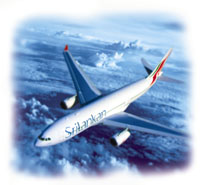 SriLankan Airlines Group reported a 75.9% increase in net profit after taxation to 5.64 billion rupees ($54.6 million) for the fiscal year ended last March 31.
Revenue for the group, which consists of SriLankan Airlines and subsidiary SriLankan Catering Services, climbed 25.2% to 46.19 billion rupees. “This is only the beginning, and we expect continued strong growth in the group for years to come,” the company said in a statement.

The airline launched a large number of new projects during the year, including SriLankan Air Taxi, an amphibious domestic operation that serves 10 destinations. New services were launched to Kochi and Hyderabad and flights were resumed to Karachi. The carrier also acquired two A340s, two A320s, an An-12F freighter and a Cessna Caravan floatplane during the financial year, bringing its fleet to 17 aircraft
——-