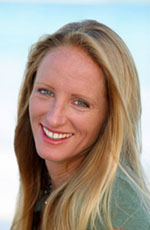 Hurricane Ivan has caused widespread chaos across the Caribbean. Demolishing Grenada, crushing Jamaica before turning its brute force to the Caymans. Around 65 people have been reported dead and scores have been left homeless. It is difficult to imagine what it would have been like to be caught up in the fierce weather conditions. CTN managed to contact Cayman native and world free dive champion Tanya Steeter to garner the sheer magnitude of the natural disaster.‘Just the terror in my mother’s voice as she prepared to evacuate her South
Sound home was enough to understand that they were expecting the worst’ stated Tanya, she continued, ‘a brief conversation with her this morning relayed what an awful 24 hours they have had and how catastrophic the damage is all over the island.’

Reports are that Ivan ‘devastated’ the Caymans tearing roofs from buildings. Cayman reporter Paulette Connolly said of the impact, “the winds of the hurricane ripped homes apart like matchsticks,’’  she added, “Cars and trucks floated away like toys during the storm surge. It is unimaginable. We are devastated. The sea went through apartments,’’ Cayman Net News reported.

The UK is still awaiting an update on the exact damage caused. Owing to the time difference that is probable to be this afternoon. One Cayman spokesperson said that a ‘British Navel ship has arrived’ and that a helicopter would be flying over to assess the scale of the disaster today.

Street closed with, “This will take a very long time to recover from, physically as well as emotionally for the people of Cayman. Please pray for them!”
——-