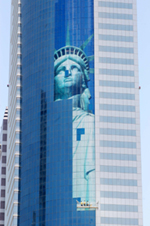 Dubai-bound commuting drivers battling traffic in the morning rush hour on Sheikh Zayed Road, as well as visitors on sightseeing excursions have wondered for days about the twin cradles working round-the-clock on the bright, gleaming windows of the elegant 21st Century Tower.  As time goes by, it looks more and more as though the futuristic 55-floor building - which happens to be the world’s tallest residential tower - has been targeted for special attention by a gifted team of megalomaniac graffiti artists. On the other hand, the shape of the granite grey figure slowly emerging against a light blue sky backdrop seems more and more familiar. That chiselled face, that radiant crown, that raised arm, that torch ... could it be what it seems to be?

Now the mystery is about to be revealed. The huge jigsaw puzzle gradually nearing completion on shiny glass is well on its way to turn into Emirates Airline’s landmark celebration - literally - of its start of passenger services to New York City, while claiming title to the world’s tallest window graphic in the process.

Since 1st June Emirates has been flying daily non-stop to JFK, having selected the exciting city by the Hudson that the Yankees themselves have affectionately nicknamed the Big Apple, as its first gateway into the New World and the largest aviation market on earth.

By the end of next week, Emirates will have pieced together a gigantic graphic of the Statue of Liberty, the 19th century enduring icon of a regal matron symbolising mankind, on the 21st Century Tower. Specifically built for Emirates, the tower is home to a large number of the airline’s staff.

Set to dominate the Dubai skyline, the mammoth graphic is all of 53-stories and 180 metres in height, while the statue depicted on it stands proud at 140 metres, exceeding the actual monument including the pedestal by 47 metres and the statue itself by 94 metres. The sight of the graceful giant can be enjoyed from 10 kilometres away.
A delighted Mike Simon, Emirates’ Senior Vice President Corporate Communications said: “Our window graphic is guaranteed to create a sensation not just in Dubai but worldwide. We chose to depict the Statue of Liberty because of its instant recognition and identification with New York City. It is a very apt embodiment of our excitement about this new route and lofty plans for the Americas.  Emirates’ long term aim is to enjoy the same kind of global recognition as the statue itself.

“The window graphic emphatically says ‘Emirates has arrived in New York City and is there for keeps.’ We have always prided ourselves, and been feted, on our innovative and well-designed campaigns. This is one of our best yet. We are grateful to the Al-Rostamani Group for allowing us to use this building as a giant billboard.”

An installation team is working day and night to complete the job over the next two weeks. Once completed, the right-vision graphics wrapping the building will allow unobstructed views from the inside, whilst creating a sharp graphic on the exterior that will probably be the largest replication of the Statue of Liberty to-date.

Using 345 litres of ink, the five-metre long printers are running for 20 hours a day just to finish the artwork. Three men are working full shifts for 26 days straight, cutting and trimming the artwork for installation. Covering approximately 5,775 square meters, the installation will take around 3,000 man hours to complete.

The artwork is being applied to the 21st Century Tower not unlike a puzzle being pieced together, with each piece of artwork individually numbered and applied to its corresponding window.
——-