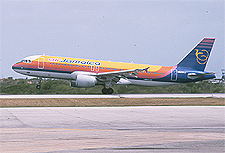 Last week Air Jamaica announced that it would have to add on average an additional US$40 to its fares in order to counteract the increased charge on oil globally. Speaking to the Jamaica Observer last week Air Jamaica’s CEO, Chris Zacca, said ‘that in recent months the airline has been absorbing higher fuel costs, but could no longer maintain this price support.’
“We have now come to a point where we have no option but to pass on the costs if we are to remain viable,” Zacca said.
Other carriers operating in the Caribbean have also increased fares including Trinidad based BWIA.
The Observer continued by adding that ‘up to last November Air Jamaica paid US$0.89 (89 cents) for a gallon of jet fuel. Now, the cost is US$1.26 per gallon.
During this year’s first quarter, Zacca said, the airline’s fuel bill jumped US$4.2 million (J$260 million) over budget.’
——-