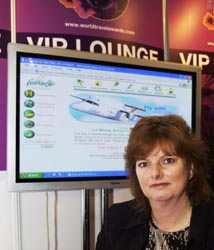 Founded in 2000, Caribbean Star‘s
reputation for service and reliability has made it the fastest growing airline in the region. Three years on, Caribbean Star now operates over 100 daily flights and is looking to forge closer links with UK and Europe.
Breaking Travel News caught up with Lynn Morris, Caribbean Star Airline’s newly appointed UK and European Regional Marketing and PR representative at ITB Berlin.
Can you tell me about your own background in the travel industry?

I’ve been involved in the travel industry in the UK for a number of years,
I have recently been taken on to act as the UK and Europe Regional Marketing and PR representative for Caribbean Star.

Which Caribbean Destinations do you currently fly to?

With Santo Domingo coming on as a new destination in June next year, the fleet is growing. We have a fleet of a mix of Dash 8-100’s and 300’s. Gradually the 100’s are being replaced with dash 300’s which all have leather seating and will give the airline the newest fleet in the Caribbean.

Would you class Caribbean Star as a low cost airline?

I would say that it’s very good value for money, but we sell through tour operators and travel agents and other new client ship with other airlines, as well as on the internet. Some of the flight durations are very short so there is not always time for in-flight service, but I wouldn’t compare us to a low-cost airline in the same way that they operate in Europe. We will offer an in-flight service when the flight duration is long enough.

We offer affordable connections that you can book in conjunction with an international carrier, which means that people can consider two centre holidays on one trip.

How do you sell and promote your flights?

We mainly sell our flights through travel agents and BSP, (an airline payment plan for agents who have their own airline reservation system). Agents can purchase and issue tickets for Caribbean Star using GDS systems. They can also do it in conjunction with international carriers such as BA and Virgin. We have a very close relationship with British Airways, Virgin Atlantic and we are looking to expand on that.

Have you considered other online distribution channels, such as Opodo or Expedia?

Yes, in the next couple months we will be working on an interface website for this, which will give us the opportunity to work with those alternative distribution channels. Our research into on-line options will be part of an overall analysis of distribution options in Europe. Concentrating on the UK and moving out into the major European markets - some of the online options will give us a much more global reach for the airline.

Where would you confine as being the major European focus at the moment?

For the parts of the Caribbean that we serve, areas that are showing the most potential at the moment include Italy, The Netherlands and now Germany is starting to come back as a player in that field.

There has been a lot of activity in what I call the ‘value option’ Caribbean destinations; those that are a little bit more expensive in the market have had less global appeal. Certainly for the Caribbean, the UK in many places - is the number one supplier having taken over from the States. Following along from that, the rest of Europe is a little bit lower, but like I say a lot of interest from Italy even Portugal, Netherlands, those sort of countries all have a lot of Potential from this part of the Caribbean.

Which routes you are planning to expand to in 2004?

We are going to be taking on Santa Domingo to Antigua in June and our sister airline, Caribbean Sun, will travel out of Puerto Rico. We will also include three new destinations: San Juan to St Vincent, Antigua to St Thomas and St Croix. There is a lot of growth in that area for the European market. Puerto Rico is now proving to be very popular, and Caribbean Sun will be able to service that market as well. So both airlines are looking to expand.
——-