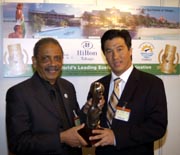 ITB Berlin is well recognised for its importance in driving business to the 160 or so destinations that flock to the Berlin Exhibition Grounds every year. Speaking at this years event, which opened today March 12 2004, Hon. Neil E. Wilson, Secretary Division of Tourism Tobago House of Assembly said, “ITB Berlin is very important to us, it is a great tool for making business. We see the positive effects of ITB throughout the year.“Tobago, winner of the World Travel Award for Ecotourism 2003, is recognised globally as a first class destination. “Tobago is a wonderful destination, rich in culture and diversity,” added Hon. Wilson.

Speaking of Tobago’s aims at this years ITB Hon. Wilson made it clear that the US is a market that Tobago would like to target, “When you consider Tobago is just 1600 miles from the North American mainland and the US only accounts for roughly 5 percent of the market share and the UK which is some 5000 miles away and makes up 65 percent, it really doesn’t make sense”.

Owing to this lust to drive increased arrivals from the USA BWIA, Tobago’s national carrier are being encouraged to increase their flight quota by three additional flights per week. It is estimated that around 30 percent of Tobago’s GDP comes from tourism.

In addition to increased airlift Hon. Wilson indicated that large sums of investment would be pumped into the international airport (Crown Point), to cope with the additional arrivals.

“We will be putting TT$100 million into the expansion of the airport allowing it to accommodate three wide-body aircrafts (747’s) at any given time.”

Other areas that Wilson indicated were high on Tobago’s objectives this year were increased promotion of smaller hotels (30 beds or less), and a drive to highlight the amazing ecotourism on offer.

Most of this promotion will be driven via the Internet, something that Hon. Neil realises is an essential tool in mustering interest in the Caribbean island.

“The Internet is a vital tool in the promotion of any destination. Its also the most cost effective! I can really see in the next five years or so that the travel agent could become redundant.”

The Berlin Exhibition Grounds, or Messe as they are more affectionately known as, opened their doors to this years ITB Berlin today, March 12 2004. The event is one of, if not the biggest, of its kind in the world. The exhibition is a great opportunity for countries to expand their global market share and also meet and greet industry giants.