The world’s largest passenger aircraft, the Airbus A380, touched down at Stansted Airport for the very first time earlier.

The new British Airways superjumbo flew into the airport as part of the airline’s flight training programme before the aircraft enters long-haul service later this year.

The test flight also enabled the crew to familiarise themselves with the operational requirements and layout of Stansted’s airfield in the event the aircraft has to divert as a precaution or if its destination airport is unavailable.

Stansted was awarded Code F status by the Civil Aviation Authority in 2010, allowing aircraft such as the Airbus A380 and the Boeing 747-8 to operate from the airport.

Three 747-8 freighters have been based at the airport since 2011 but today’s visit was the first chance to test the airport’s ability to accommodate an A380, known as the ‘whispering giant’ due it its significantly lower noise levels compared to its nearest rivals. 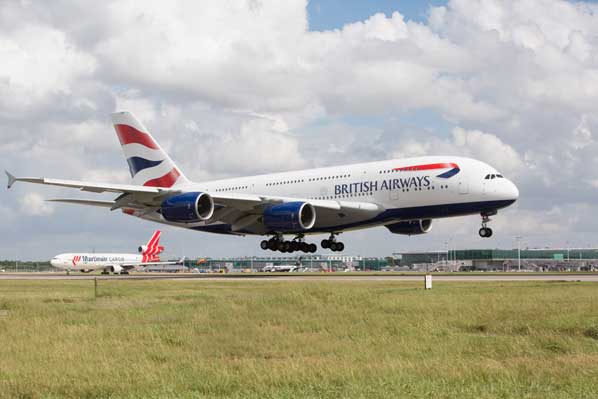 Stansted Airport managing director, Andrew Harrison, said: “Stansted is a world class airport that has the ability to accommodate the new generation of aircraft thanks to its ‘future proof’ design and layout so today is a fantastic occasion as we welcome our first ever Airbus A380.

“This fabulous aircraft is more fuel efficient than its predecessors and is one of the quietest planes in the sky - it really is a whispering giant.

“The state-of-the-art aircraft demonstrates the continual improvements made in design and technology by the aviation industry to meet the dual challenge of providing for passenger growth while reducing environmental impacts.”