Nominees for the Africa World Travel Awards (WTA) have been announced, with over 400 top travel brands competing to be named as the best of the best.

The WTA Africa & Indian Ocean Ceremony takes place in July - but the fight is just beginning to make it on to the coveted winners’ platform.

Described as the ultimate achievement for any African company, voting has opened and nominees are now campaigning hard with agents and industry executives to win support.

Regional winners will go forward to compete in World Travel Awards 2010 final in London, when they will be up against some of the finest travel operators in the world, consistently demonstrating excellence in every aspect of their business.

World Travel Awards - now in its 17th year - is a major driver of supreme quality standards within the global travel and tourism industry, encouraging excellence in everything from product innovation, creativity and staff training to customer service and overall performance

The African nominees are among 5,000 nominated companies, spread across more than 1, 000 categories - including airlines, cruise companies, destinations, resorts and hotels in 162 countries.

WTA founder and president, Graham E. Cooke, said: “We have been overwhelmed with the tremendous response to self nominations this year, which have grown a phenomenal 50 per cent on 2009.

“The surge in nominations, in the face of a global recession, demonstrates the vital role that World Travel Awards now plays within the travel industry,

“More multinational companies than ever, ranging from Etihad Airways and TAP Portugal to InterContinental Hotels, Universal Studios and Disney, are spearheading their global marketing campaigns with their award victories,” he added.

Winners of the Africa & Indian Ocean Ceremony will be announced at the Sandton Convention Centre, Johannesburg, South Africa on Wednesday July 7th 2010.

One of the most impressive meetings venues in the country and selected to be a nominee in the new 2010 category, ‘Africa’s Leading Meetings & Conference Centre’, The Sandton Convention centre is a perfect fit for this years hotly contested awards. 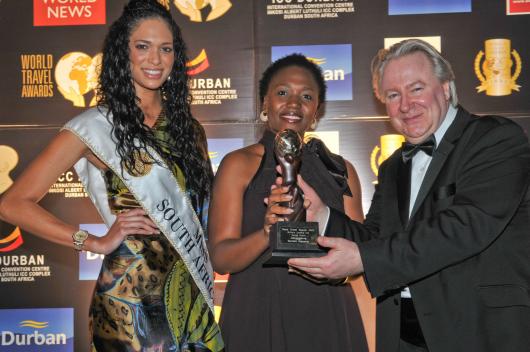 “African operators in particular are up against stiff competition in the regional awards this year”, added Mr Cooke.

“The quality of African travel and tourism has improved greatly in recent years, which means that leading authorities believe the region has considerable potential for the future. Africa is expected to achieve a higher travel and tourism growth ratio of around five per cent, rather than the global average of just over 4 per cent.

“Forecasters also say that Africa could benefit from the expected increase in long haul travel up to 2020.

“These developments are extremely encouraging and mean that World Travel Awards and its drive to help improve customer service and overall business performance in Africa is more important than ever. Inevitably, the region’s first big test is about to begin as the FIFA World Cup gets under way.

“Africa will be an incredibly exciting place to be this summer and we are very much looking forward to bringing the World Travel Awards back to South Africa in July,” concluded Mr Cooke.