These are exciting times for the luxury hotel market in London, with a sometimes stuffy roster of existing properties being challenged by a host of new international brands.

Earlier this year the legendary Italian jeweller Bulgari opened a boutique 78-room property overlooking Knightsbridge Green on the site of the former Normandie Hotel. Run by Ritz-Carlton, the hotel offers six luxury apartments, a restaurant at lower ground level with a sweeping staircase supported by a silver lit balustrade, a lounge, bar and spirit room.

It has already become a firm favourite.

Also opening this year, Belgraves is the first offering from United States-based Thompson Hotels. Seeking to embody the charming, upscale atmosphere of its neighbourhood, the hotel is situated among numerous internationally renowned shops, restaurants and London attractions.

The hotel is part of a wider trend toward smaller, boutique properties in the British capital – with the sector set to almost double in size between 2011 and 2013.

On the grander side, the Savoy has been well received since it reopened in 2010, while the Corinthia Hotel has established itself among the upper echelons of London society following its £130 million regeneration.

St. Pancras Renaissance, operated by Marriott Hotels, has been trading strongly since it opened in late 2010, while the old guard of the Connaught, Claridge’s, and The May Fair, still attract a loyal following. 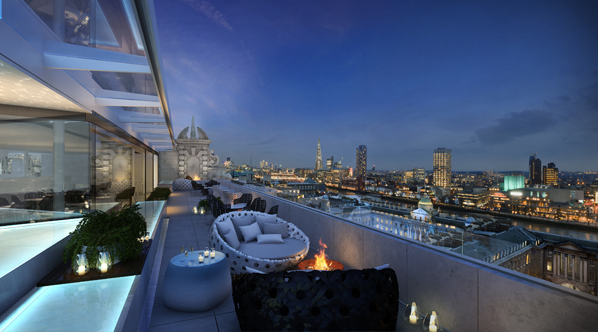 Radio at ME London

Next to challenge for a place among this elite group is ME London, created by Foster + Partners for Meliá Hotels & Resorts.

Scheduled to open in December this year, the property is a stones throw from the dazzling lights of the West End and will offer a high-end service for design conscience, luxury travellers.

Placing itself as a more traditional alternative to the recently opened W London, the property is Foster + Partners’ first UK hotel project and the first for which they have designed all of the interiors and exteriors.

As David Nelson, head of design at Foster + Partners, explains: “The project represents a number of firsts for our practice – ME London is Foster + Partners’ first London hotel and the first for which we have designed everything, inside and out.

“We have also collaborated with STK, integrating their unique identity and service in all food and beverage locations.

“Our intention has been to make sure that the hotel will be a unique experience, efficient to run and appropriate to the level of service that ME London wishes to deliver.

“We put ourselves in the guests’ position to make sure that their experience would be exceptional – we extensively prototyped the rooms and made many changes to improve design and to stay within agreed budgets.

“The result combines a high level of functionality with a simple, refined aesthetic.” 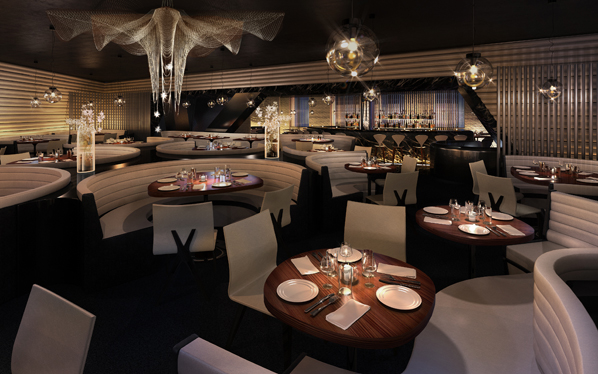 STK is the first UK venture from The ONE Group

Situated in Marconi House, the original London home of BBC radio, ME London offers a collection of 157 rooms, including 16 suites, and ultra-luxurious Suite ME and a two floor penthouse in the turret of the building.

The new hotel building corresponds in height, scale and materials to its neighbour.

Its minimal detailing, simple, triangular oriel windows and Portland stone facade give a sense of cohesion, and the setback of the hotel’s upper level terraces follows the mansard roof of Marconi House.

An elliptical tower on the corner of the hotel defines the end-point for the Aldwych Crescent and marks the main entrance at street level, which is sheltered beneath a wide glass canopy. 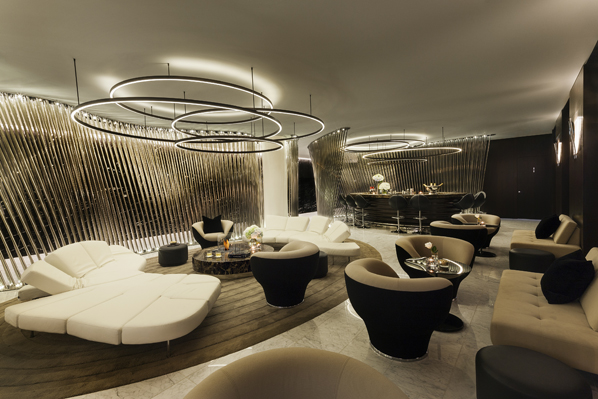 Marconi Lounge celebrates the history of the building

The corner tower is topped by a glass cupola – a contemporary reinterpretation of the Edwardian-style domed roof of One Aldywch opposite – that houses the living space for the ME penthouse suite, with its 360-degree panorama of the city.

The interiors fuse contemporary detailing and classic traditions, with a dramatic monochrome palette, as guests move from dark to light spaces.

For dining, the first British incarnation of glam New York Steakhouse concept STK, presented by The ONE Group, will serve American grill-style dishes from midday through to late night.

Cucina Asellina, situated on the ground floor, will add authentic Italian cuisine, while a tenth floor rooftop bar Radio will celebrate the history of the building with views over the city.

Take a look at the official website for more information – or check back with Breaking Travel News next month for all the latest.