When it comes to going over the river and through the woods to grandmother’s house for Thanksgiving, roughly 19 percent of last year’s travelers are rethinking that journey this November 24.

But that’s not the bad news. According to American Express’ latest Spending & Saving Tracker, more than one in 10 young professionals intend to drive instead of fly, 8 percent intend to stay fewer days for Turkey Weekend, and 7 percent of this crowd will use reward points and miles to help pay for the trip.

In other words, we’re training the next generation of discretionary income earners to cut back on travel. And as many businesses know, old habits die hard.

The short-term picture isn’t that bad. For instance, 78 percent of the affluent expect to spend more or the same over the next 30 days in restaurants, while the general public says it will spend less on groceries — another positive sign folks could be throwing caution to the wind to celebrate. Pamela Codispoti, the American Express senior vice president and general manager of Cardmember Services, agrees.

“These results show that consumers do plan to open their wallets this holiday season, starting with Thanksgiving travel, but many are re-prioritizing those expenses,” she cautions.” If Halloween is any indication of things to come, 36 percent of young professionals said at the end of September they plan to purchase less expensive costumes this year, compared to 16 percent of affluent and 15 percent of the general population that admitted the same thing. In fact, 26 percent are making their own customer or using hand-me-downs — while only 13 percent of the affluent and 11 percent of the general population plan to take that route. 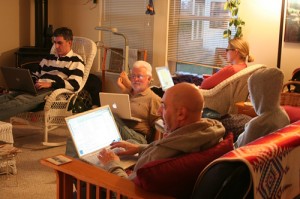 Sigh. More of those frugal living traditions forming that could bode ill for the travel industry’s cash flow in the fourth quarter.

So what does the airline industry do in light of this payment skittishness? Just this week, American Airlines, Delta, Northwest and USAirways announced a $10 per ticket surcharge — each way — for flights on Nov. 29, Jan. 2 and Jan. 3. This is in addition to luggage fees that increased in 2009, and additional charges for specific seats in the coach class. “Yes, it brings in a lot of sorely needed revenue to the airlines — but to the detriment of holiday travelers, who are already paying stiff fares for those high-traffic days,” FareCompare.com’s CEO Rick Seaney told bNet.

While pricing experts will hammer home that discounting services isn’t always the right answer, even in a recession, merging an attitude of gouging with a population losing interest in the product don’t bode well for a healthy profit in this industry down the road.