The 2014 edition of the Gulf Incentive, Business Travel & Meetings show at the Abu Dhabi National Exhibition Centre has closed with over 74 first-time participants attending the show.

These included delegations from Kazakhstan, Russia, Morocco, South Africa and South Korea, all of whom launched exhibitions at the this exciting business to business event.

In appearance the event certainly looked smaller in size than previous shows, despite organisers saying this was one of the best to date, with over 250 key targeted hosted buyers and more than 2,000 trade visitors to the two and a half day show.

Participants at GIBTM told BTN that the opening day and the morning of the second were extremely busy, but the afternoon and the following morning were quiet - it certainly was on the morning we visited.

The mood during those busy times was said to be buoyant.

Ali Abu Monassar chairman of Dubai based destination management company The Vision Arabia, told BTN: “Last year was a good year for the MICE market and 2014 was looking even better, with business back to pre-economic crisis levels.

“But business will get tougher as those countries affected by the Arab Spring are coming back.” 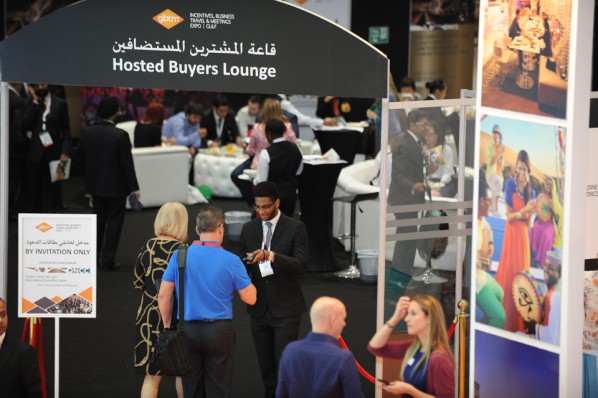 The exhibition floor was dominated by the impressive and technologically enhanced stand for the Abu Dhabi Tourism & Culture Authority which had arrived from the recently held ITB in Berlin.

The award winning stand was designed by UK company Wood, whose managing director Melanie Wood told BTN: “It was an absolute delight to win in Berlin, for the second year running, the award for The Best of The Best and we are looking forward to our next show which will be the Arabian Travel Market in Dubai.

When asked about the design of the stand for that event she said: “It’s a secret at the moment, but there will be some special surprises for visitors to ATM.”

Across at the Qatar stand, Hamad Mohammed Al Abdan, director of exhibitions, Qatar Tourism Authority provided BTN with an overview of their Tourism Masterplan.

He revealed: “The MICE sector was an important part their tourism goals, especially with events like the FIFA World Cup 2022.”

MICE is important to Qatar and this was highlighted by Abbas Asfour, banquet sales manager at La Cigale, Doha, which hosted the Grand Final of the World Travel Awards in 2013.

He told BTN: “It was an honour to hold such a prestigious event at La Cigale and to be able to showcase to the leading hoteliers from across the world what the hotel can offer - for both the MICE market and tourism in general.”

GIBTM 2014 was the eighth edition of the industry showcase and delivered a content-rich programme, boosted by the region’s flourishing meetings calendar and vibrant business travel sector.