Aviation has been top of the political agenda over the past few weeks in the United Kingdom, with indecision over the future of capacity in the south-east of England perplexing the government.

Here Breaking Travel News talks to Angus Barclay of Cathay Pacific about how he thinks the situation is developing.

Breaking Travel News: We have seen Hong Kong Airways pull out of the UK market in recent months, citing continued economic uncertainty. Can you tell us a little about how Cathay Pacific is faring at present?

Angus Barclay: The market remains difficult - it is a challenging out there.

We operate on a busy and competitive route here into London: Air New Zealand, Virgin Atlantic, British Airways, and ourselves are all on the route between London and Hong Kong. It is very well served.

Overall, the situation in Europe is a challenge. It is a question of confidence.

With the debt crisis, issues with the euro, I believe there is potential demand out there. However, there are a great deal of confidence issues which will have to be worked through first.

That said, we need to look at where there is still growth in the world, and that is in Asia. There is business still to be done there. That is the big upside for us.

BTN: The price of fuel has plateaued of late. Has that alleviated any pressure on the airline?

AB: Behind all that, yes, there is also the issue of the price of fuel.

While it peaked in 2008, the effect is much greater now, as it has remained higher for a longer period of time – at around $115 a barrel.

This is still very much an issue for us.

If you look at the dynamics of a softening market on a global basis, you would expect to see the price of fuel also falling. Perhaps people travelling less, with less disposable income, and a drop in the price of fuel.

That has not happened this time, squeezing anybody who is related to oil.

For us as Cathay Pacific it is a huge issue, 42 per cent of our costs.

BTN: How are you seeking to address the situation?

We have operated this route with Boeing 747s, but we are now phasing these out.

They will be replaced by Boeing 777-333 ER aircraft, newer aircraft, which are 23 per cent more efficient than the older planes. A very positive step.

Within the aircraft themselves we have new product: a new business class, new premium economy class and a new long-haul economy seat.

Within the cabin, as well as the aircraft itself, it is all new product.

Recently, we have been promoting the business class elements of this.

We have the service on more than 50 per cent of our flights, so we have reached a critical mass.

People within the industry will be aware - but we are now rolling this out to all passengers.

Both the upgrade to the economy class and to the business class have been well received, we are getting some very positive feedback on these. 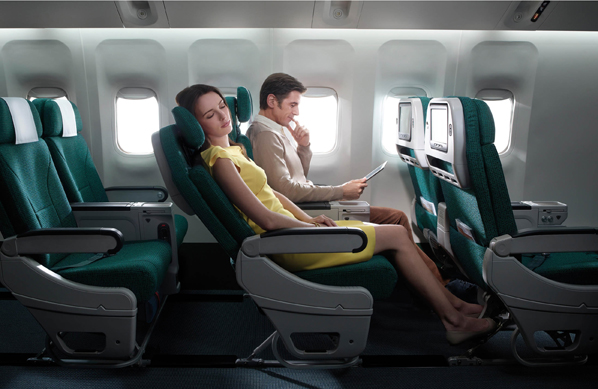 BTN: Cathay Pacific also flies to a number of other destinations here in Europe, outside of the UK, as well as Russia. Do you feel the UK is being hindered by the squabbling over the future of aviation capacity?

AB: It all boils down to the issue of having a hub airport.

Cathay Pacific is a hub carrier in Hong Kong and we spend a lot of time investigating new destinations there.

It is absolutely the case that Britain is putting itself at a disadvantage if it does not develop hub capacity. Cathay Pacific sees every logic in having a third runway at London Heathrow Airport.

What I believe is happening now is that people are taking a big step back and looking at the long-term: considering where a hub airport can be, whether we can develop Heathrow, or to look for another solution.

The difficulty with this is that it takes a long time.

When I arrived two years ago, politically, this was a subject that nobody was touching. Now, decision makers have realised there is a serious economic problem here.

If you are a home-based carrier, or even doing business here, this is a significant issue.

Both from the point of view that the hub already exists, and that any other development would take a long time, yes, a third runway at Heathrow makes sense to us.

BTN: The European Union Emissions Trading Scheme has also been a talking point since it was extended to the aviation sector in January. Could you outline Cathay Pacific’s views in this area?

AB: Our position on carbon emissions, is that we very much see that an issue - that while aviation only accounts for two per cent of global emissions - it is something we need to address.

The question is then, how do you go about it? Every time we get new technology, we are being more fuel efficient per passengers: which is a good thing.

We also see the people who control air traffic as having an important role to play.

By allowing airlines to fly in straighter lines you burn a lot less fuel.

Even crossing Europe, passing between different air traffic controllers, you have inefficiencies. If this was managed as a block, it would cut fuel use.

However, these two things are not going to address the growth in global aviation. We see two more strings to the bow.

The first is biofuels – but they have to be, firstly, sustainable, and secondly, scaleable.

This means you cannot takes food stuffs which would be for human consumption, you cannot use up water supplies and you cannot impact on local communities. That can all be done.

We know it works, because airlines are already using it – we have proven scientific application.

But scalability is equally important. You have got to find a source which is ongoing, which is sustainable and will give provide sufficiently moving forward.

We have just appointed a full time manager in this area and it something we are acutely aware of.

The last element of this - economic mechanisms, of which an emissions trading scheme is one.

This is perhaps the most effective way of cutting emissions - there is a good argument in favour of a scheme to reduce carbon emissions in aviation.

The difficulty with the European approach is that is it is regional: what they call extra-territorial.

The mechanism is imposed on the rest of the world, who have not been consulted on this.

We very much favour a global scheme, through the International Air Transport Association or International Civil Aviation Organisation, the United Nations body. BTN: How about Air Passenger Duty? Do you feel all the noise around this issue has influenced government policy?

AB: We shouldn’t stop talking about it. It is really bad for the UK. It suppresses demand, encourages people to go through other parts of Europe.

From an Asian perspective, if you want people to fly in, to work, to travel, to spend money in the UK, if you place this hurdle in their way, they won’t do it. People will go elsewhere.

BTN: Looking at Asia, we have seen a surge of low-cost carriers there over the past decade, led by AirAsia. How has Cathay responded to this development?

AB: From Hong Kong we compete with 90 different carriers, we have been there over 65-years. Competition is normal to us.

Low-cost carriers are on the rise there, as they are everywhere in the world, but when I look at Asia there are a couple of considerations which are perhaps more important there than here in Europe.

Asia is not one homogenous area, unlike Europe. While there are many differences between the countries, the regulatory environment means it is one – the Europe Union.

This means a low-cost carrier can set up any time, in a new country.

Within Asia, there is still sovereign division between the countries, which brings traffic rights into play. Therefore, the environment does not lend itself to the proliferation of low-cost carriers in the way that Europe, for example, does.

We must also consider the specific dynamics of each country: how big is it, does it have secondary airports? All the things that a low-cost carrier would look at before they would consider a launch.

It is no surprise that low-cost carriers are growing, but the dynamic is very difficult to what you see here in Europe.

BTN: What role does DragonAir play in this?

AB: DragonAir is very much a full-service airline, with many Asian routes, but is also strong going into China.

It works very well as a hub and spoke operator going into China.

We, as Cathay Pacific, have no plans at present to set up a low-cost carrier.

BTN: Finally, oneworld, the airline alliance, is set to welcome Qatar Airways. Can you tell us your thoughts on the future role of airline alliances? Do you see them being replaced by larger, single, airline groups such as International Airlines Group?

AB: Qatar Airways will fully join the oneworld alliance in approximately 18 months time: they will be the first of the big three to align in this way. It is very positive.

The Middle East is of ever growing importance in aviation, and this is good to see.

When an airline joins an alliance is does open the eyes of passengers to new opportunities. For us here at Cathay Pacific there will be many new destinations.

However, we do already have Royal Jordanian onboard, another Middle Eastern carrier.

There could be opportunities in Africa and South America, areas that we do not operate to.

With oneworld, you know you are going to get a high-quality carrier, and this reinforces that.

I think what we are seeing, as with Qatar Airways, alliances are getting stronger.

Within oneworld, for example, we are not prohibited from doing specific airline-to-airline deals, or with carriers from other alliances – so this facilitates the alliance approach.

We must also consider traffic rights.

Individual counties, in the United States, for example, or within Europe, are different everywhere. Therefore a carrier which can operate everywhere is not really feasible at present.

I think at this time, alliances make good sense.