Rome Cavalieri - the Grand Dame of Italian hotels - is currently undergoing a multi-million pound refurbishment, taking in the public areas, executive lounge, suites and spa at the famous property.

Talking to Breaking Travel News in London, general manager Alessandro Cabella explains: “We are undergoing a renovation, but not in the traditional sense.

“Instead of closing the hotel, we are adopting a rolling process, renovating suites, rooms and public areas, but keeping the operation open.

“What we have done last year, and the beginning of 2017, is the refurbishment of one of our top suites – the Petronius Suite.

“This is our largest suite, located right at the top of the hotel, right in the middle.

“It profits from four bedrooms, which can be joined to make a five bedroom apartment, coming in at around 5,000 square feet.

“In addition to this, to answer to the Middle Eastern market, and to celebrities who choose to use Rome Cavalieri as a base when in the city, perhaps for a film, we have also added a kitchen to the suite.

“This extends the suite on the culinary side, while we have also added a butler, as we respond better to this kind of clientele.” 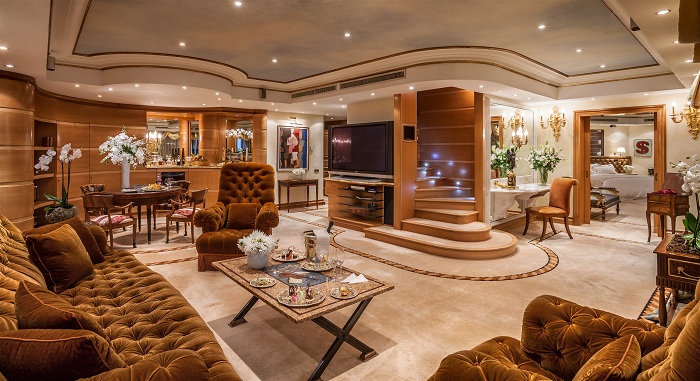 Already completed is the Imperial Club, the executive lounge, at the heart of the hotel.

Here guests can stroll through the lobby, past 18th Century Venetian masterpieces and an historic armoire that belonged to the King of Poland, before stepping into the lift, where a tap of the key gives exclusive access to the club floor.

On display here are Nureyev’s bejewelled costumes, while guests can also indulge in the extravagant creativity of the Imperial tea tasting, jewellery counter of cakes or homemade gelato ceremony.

Cabella continues: “We have also refurbished our Imperial Club, our executive lounge.

“This re-opened at the start of December and has been well-received by the market.

“First of all, we are the only luxury hotel in Rome offering the executive lounge experience; there are no other hotels with this kind of service.

“On top of this, the Imperial Club is more than just a lounge; it is a mixture between a lounge and a restaurant-proper.

“We deliver a light meals service, from breakfast through to dinner, through the living, sitting and dining rooms.” 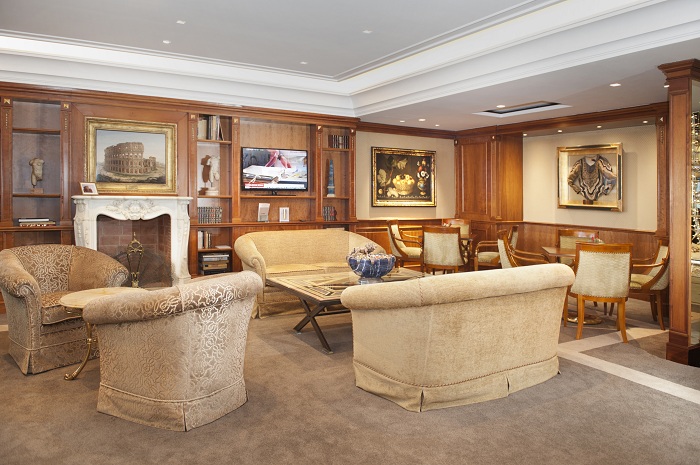 The Imperial Lounge at Rome Cavalieri

Highlights include not one but four swimming pools, three of which are found within the hotel’s 15 acres of parkland, which stretches into the distance.

Cabella adds: “We are slowly refurbishing the whole hotel, which will take time, but the idea is to bring a new look and feel to the product, more in line with the clientele.

“The hotel is well known for housing the largest private European art collection, with more than 1,000 pieces of art displayed around the property.

“We are unique for this and it does not allow us to change the character of the property too much.

“We want to leverage this unique attribute, to deliver a different experience to any other hotel in Rome.”

Asked how much the renovations will cost, Cabella smiles “a lot.”

He continues: “The hotel is 370 keys, so quite large, and we are surrounded by six hectares of park, with a lot of leisure facilities.

“The whole process of renovating the hotel will take a long time – refreshing the product.

“There are a lot of aspects, back of house, as well, which take time to complete.” 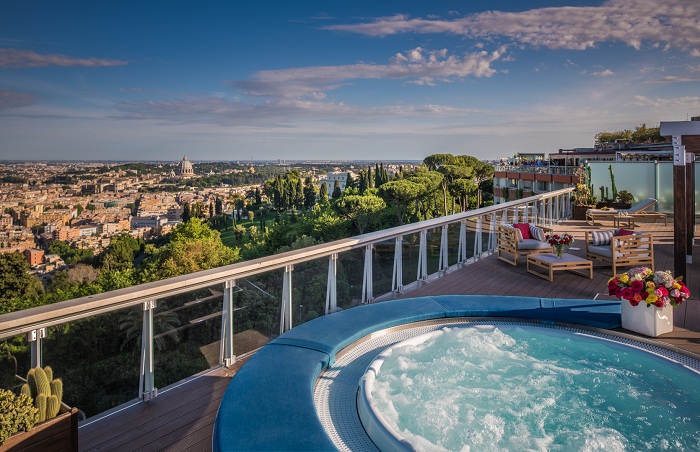 Views over Rome from the hotel

Food is key to the Rome Cavalieri, with three-Michelin starred chef Heinz Beck, overseeing La Pergola, one of the world’s most beautiful restaurants.

With its one-of-a-kind cuisine, offering a fusion of genius and creativity, the location sets forth new tastes from the flavours of Italian and Mediterranean tradition.

What’s more, Beck is also signed on to develop a new eatery at the hotel.

Cabella continues: “Next year we are definitely planning to refurbish La Pergola and there is a project that is also under discussion at this moment, again with Heinz involved, that would most probably be developed in the lobby.

“But I cannot tell you for the time being!” 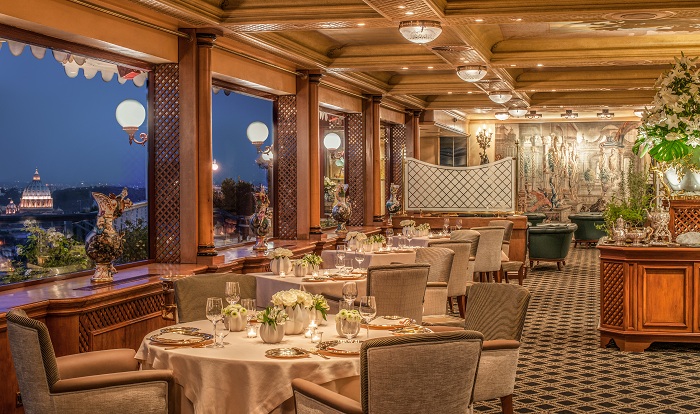 Of course, sitting atop one of the world’s most beautiful cities also plays to the hotel’s advantage.

“It takes 20 minutes to get into central Rome, to the Spanish Steps.

“We provide a free shuttle service, from the morning until the evening,” continues Cabella.

“It is very easy for guests to get into the city, to the bars, shopping, sightseeing, and then coming back to the real luxury, at the top of the hill.”

Rome, and Italy more generally, are also seen as a relatively safe destination in 2017, with turmoil hitting rival markers.

Cabella explains: “I cannot deny Italy is certainly benefitting from what is happening in other countries, in Europe, in terms of security.

“We are doing well, seeing an incremental growth.

“The American market is coming back to Rome after a certain stagnation.

“We had a stagnant year in 2015, but that was caused by a lot of guests going to Milan for Expo 2015 there, so we were somehow forgotten.

“In terms of the remaining European nationalities, the bulk are constant and stable.”

Speaking on the day Britain formally revealed its decision to leave the EU to the European authorities, Cabella adds the UK market has so far remained strong.

“The UK market represents 20 per cent of our sales, which is good, and there has been no fluctuation given the political situation, yet.

“Let us see how the summer goes, a lot of British visit in the summer, and use Rome as a base for pre- and post-holidays.

“I will be in a position to answer that after the summer,” he explains. 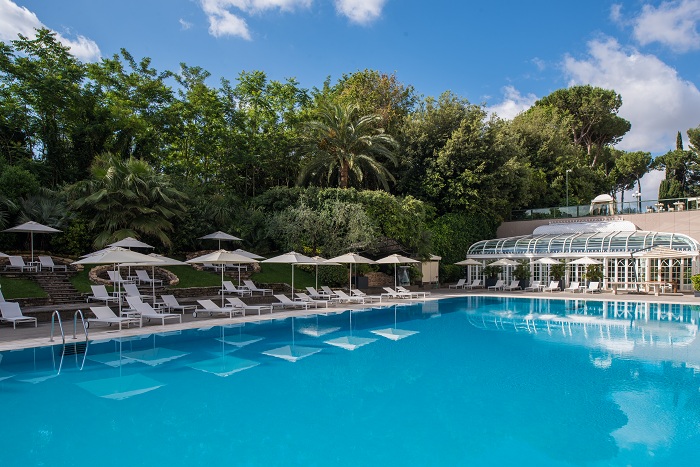 Finally, the city of Rome itself has also seen a number of positive developments in the past few months.

At the end of October last year, after 18 years of construction, the city inaugurated its new convention centre, the Nuvola, built by Condotte for a cost of €353 million, while the famous Colosseum has also recently been spruced up.

“It is certainly a city that in this moment is moving – honestly, not at a pace that it should be.

“When comparing Rome to Milan or to other capitals in Europe, we are already quite behind in terms of infrastructure and transport; we have years of work ahead to catch up.

“But it is positive to see, in a short period of time, thanks to private willingness and capital; the Coliseum has been refurbished, while other monuments have been cleaned up.

“But we are not Dubai! Even for parking spaces, it takes decades,” laughs Cabella.

An experience as rare as the air at these giddy heights with its mix of playful luxury and serious art, the hotel welcomes guests to the upper echelons of Rome hospitality from its position atop Monte Mario.