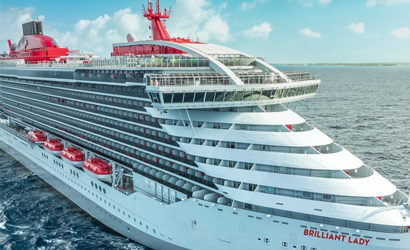 WHAT: First came Scarlet Lady, a name chosen to honour one of Virgin Atlantic’s flagship aircrafts. Next were Valiant Lady and Resilient Lady, two sister ships with names that celebrate women’s strong, fierce, and independent spirits. With all three ships in the water by the end of this summer, Virgin Voyages welcomes its fourth Lady Ship to the fleet: Brilliant Lady.

Meanwhile the line’s third ship, Resilient Lady, will locate to Australia via a 44-night voyage to Sydney departing from Athens in October 2023. The voyage is being aimed at Britons who may want to visit Australia while stopping off at ports of call including Dubai, Santorini, Rhodes, Mumbai, Goa and Singapore.

Like Brilliant Lady’s predecessors, Virgin Voyages was extremely thoughtful when selecting a name that would boldly stand alongside her sister ships. The company sought a name that exemplifies its brand’s values and ethos, the truest representation of its mission to “Create an Epic Sea Change For All.” As its goal has always been to create a bright and radiant experience for its sailors, it was only appropriate that its fourth ship name reflects that.

Brilliance — which means both radiance along with exceptional talent and intelligence — was chosen for the duality of its meaning. On every sailing, Virgin Voyages’ ultimate goal is to leave its sailors with a glowing review and having enjoyed one of the best vacations of their lives.

In naming the ship Brilliant Lady, the company also aimed to highlight the powerful intelligence of women across the globe. Brilliant Lady represents the smart, thoughtful, boundary-pushing minds of women around the world — unafraid of owning their intelligence, aware of their importance, and confidently in touch with their own sense of self worth.

Brilliant Lady’s mermaid, destinations and itineraries will be announced soon, but until then, Sailors can set sail the Virgin way aboard Scarlet Lady from Miami (available now) on Valiant Lady starting May 15 from Barcelona, and on Resilient Lady starting August 14 from Athens.