London Luton has again been rated the worst airport in the UK, as the Which? annual airport survey reveals passengers have a better experience when flying from smaller airports.

The “disastrous” customer service, queues at passport control and poor facilities placed Luton airport as the worst overall airport in the Which? survey with a dismal customer satisfaction score (35 per cent).

It is the third year in a row Luton has come bottom of the survey.

The survey was based on 11,265 passenger visits to UK airports, taking into account everything from queues at bag drop to the cleanliness of toilets.

Long queues at airport security on departure and queues for passport control on return were rated particularly poorly by passengers at some large airports.

In response to the survey Nick Barton, chief executive of London Luton Airport, pointed out Which? had polled just 521 travellers through the airport between May 2017 and May 2018, a total of 0.003 per cent of all passengers in that period.

“During this time we’ve undergone a period of significant change, investing £160 million redeveloping the airport to increase capacity and transform the passenger experience,” he explained.

“In the first six months of 2018 alone, 1.2 million passengers responded to our customer service tracking, 70 per cent of whom told us they were happy with their experience.

“As we near the end of our biggest transformation we’re proud to have recently opened 30 new shops and restaurants. We’ve also added close to a thousand new seats throughout the terminal and doubled the size of our security search area.”

London Stansted and Manchester T3 are among the largest airports in the UK, yet both gained just one star for the length of queues at airport security.

They also finished joint second from bottom overall in the survey with a disappointing customer score (44 per cent).

One passenger complained Manchester airport “is too small for the numbers it’s trying to handle.”

The location is however, currently in the process of a massive expansion which may reduce pressure in the mid-term.

Leading the way as the best airport in the UK, for the second year, is Doncaster Sheffield airport with an outstanding customer score (87 per cent).

With ambitions to expand, Doncaster Sheffield could soon become the go-to airport for holidaymakers in the north if it can maintain its high standard.

London Southend followed closely behind with another impressive customer satisfaction score (84 per cent).

With direct trains to Liverpool Street that take under an hour, Southend is the highest-rated London area airport, soaring past rivals Heathrow and Gatwick.

Despite Birmingham’s recent expansion and roster of new routes, it still gained the best overall score of the larger airports (61 per cent) beating Manchester’s T2 (51 per cent) to be crowned the best second city airport.

With a customer score of 63 per cent, Heathrow’s newish T5 had an even better score than Birmingham.

But passenger experiences at the UK’s largest airport very much depended on which terminal they used.

Heathrow T3 was the worst rated, with an overall customer score of 55 per cent.

Passengers were not impressed by the queues at passport control or the limited range of shops and restaurants.

Rory Boland, Which? travel editor said: “Travellers want to start their trips in the smoothest way, but long queues through airports and a lack of facilities can cast a rain cloud over any getaway.

“With new routes launching all the time, passengers have an increasing choice over not just who they fly with but where they fly from.

“If you can pick a smaller airport, choose Southend over Luton, and Doncaster Sheffield or Liverpool instead of Manchester to get your holiday off to a better start.”

Find out more below: 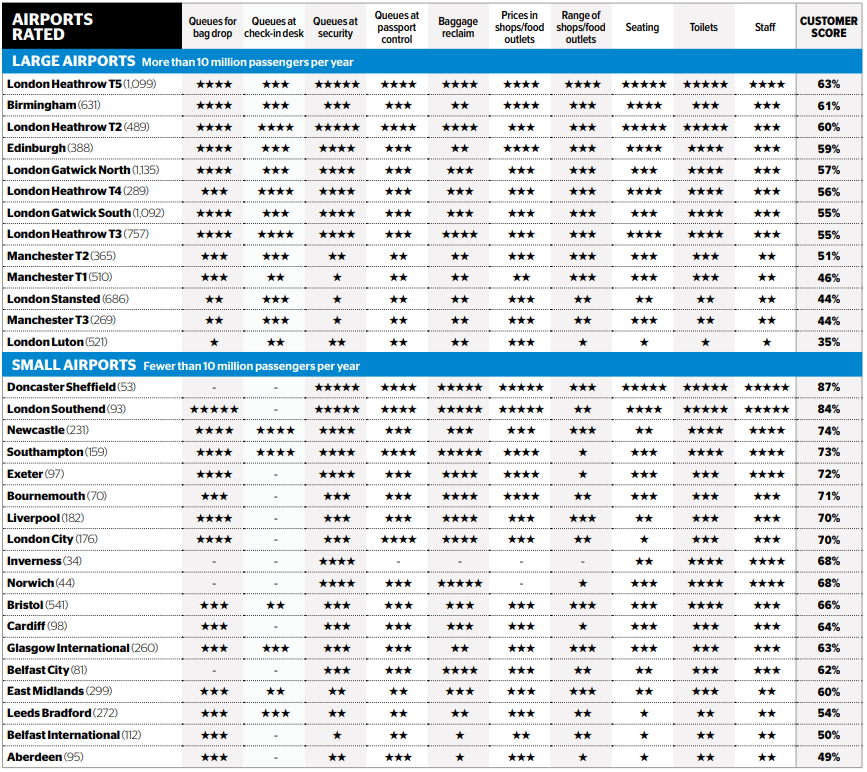