The latest research from ForwardKeys has revealed that the demand for international air travel this summer is set to be just under a quarter of pre-pandemic levels.

As of June 1st, flight tickets issued for international arrivals in Africa and the Middle East were just 31 per cent of what they were at the equivalent moment in 2019.

The Americas stood at 38 per cent, Asia Pacific at seven per cent and Europe at 22 per cent.

The one region where this summer’s travel looks healthy is the Caribbean where bookings are 81 per cent.

The dominant theme explaining what is happening to international travel is not so much Covid-19 as it is governmental reaction to the virus and the travel restrictions imposed in response to it.

For example, summer bookings to China, Japan (which is welcoming no foreign spectators for the Olympics), Thailand and Australia, which are effectively closed to visitors, are just two, four, two and ten per cent respectively. 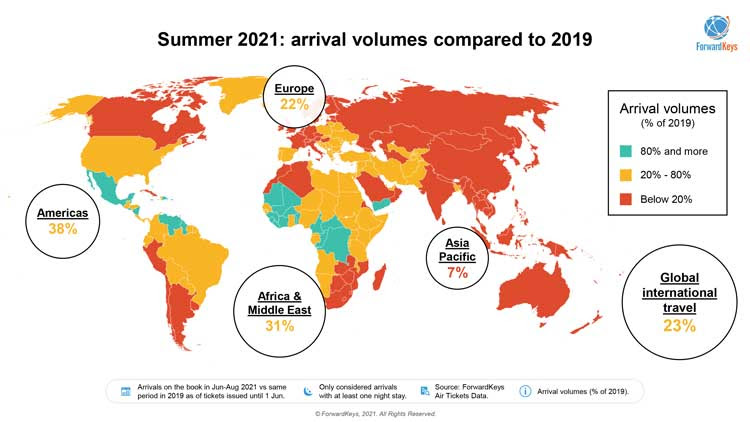 In travel terms, Europe, looks set for another disappointing summer, with the possible exception of Albania, at 73 per cent of 2019 levels.
Greece (49 per cent), Serbia (38 per cent), Iceland (35 per cent) and Malta (35 per cent) are currently set to outperform other regional mainstream destinations.

Greece and Iceland, along with Croatia, have been consistently vocal in their enthusiasm for visitors and have consistently made public promises to welcome tourists who have been vaccinated. 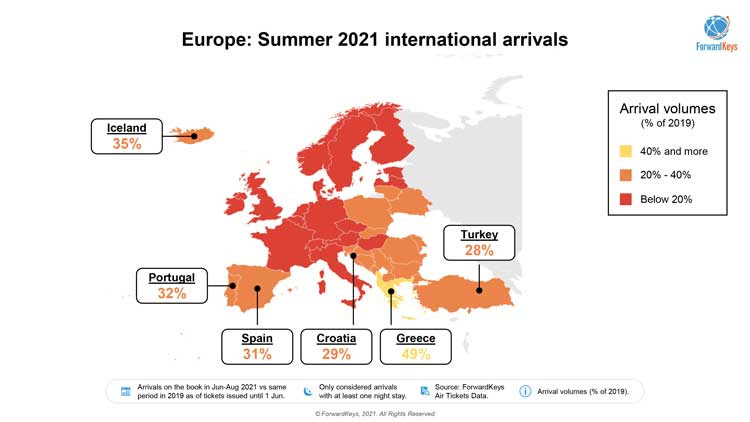 The one region of the world where a significant amount of international travel is taking place is the Americas, driven mostly by US citizens travelling to Mexico, Central America and the Caribbean for a holiday and slightly by Latin Americans going to the USA for a Covid-19 vaccination.

Destinations performing strongly in the summer bookings stakes include Mexico (86 per cent of 2019 levels), the Dominican Republic (83 per cent) and Aruba (108 per cent), which have steadfastly remained open to tourists and the Bahamas (81 per cent) and Puerto Rico (140 per cent ahead), which are allowing vaccinated travellers to enter without restriction.

Summer bookings to some parts of West Africa are also holding up relatively well, most notably Ghana and Nigeria (both at 73 per cent of 2019 levels) and Senegal (77 per cent).

However, in these cases, travel is dominated by people visiting friends and relatives. 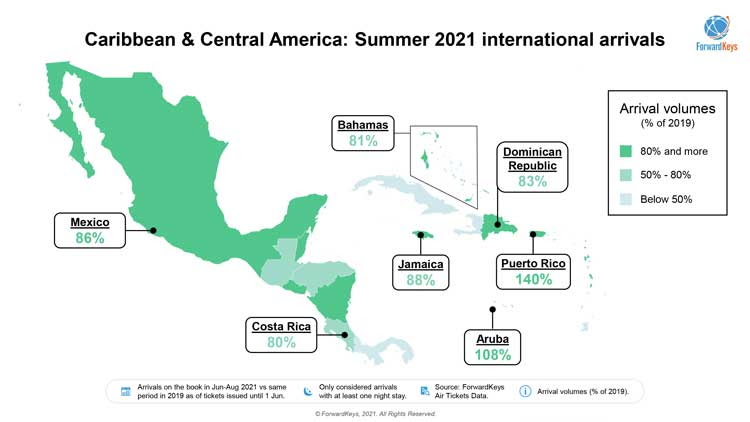 Olivier Ponti, vice president, insights, ForwardKeys, commented: “It is now clear that for most of the world, a summer holiday abroad is a dream; and a staycation is the reality.

“Travel businesses in general, and airlines in particular, will face more substantial losses, as many countries combat Covid-19 by closing their borders and imposing severe restrictions on flying internationally.

“However, certain destinations, particularly in Central America and the Caribbean, which are highly dependent on tourism, are taking an alternative approach.

“By requiring vaccination and/or proof of negative Covid-19 tests, they are showing the world that it is possible to have a summer season.”