Delta is celebrating its latest investment in New York as it prepares to open its new Terminal C at LaGuardia Airport to customers, a significant milestone in the $4 billion programme to transform and modernize one of the airline’s key hubs. 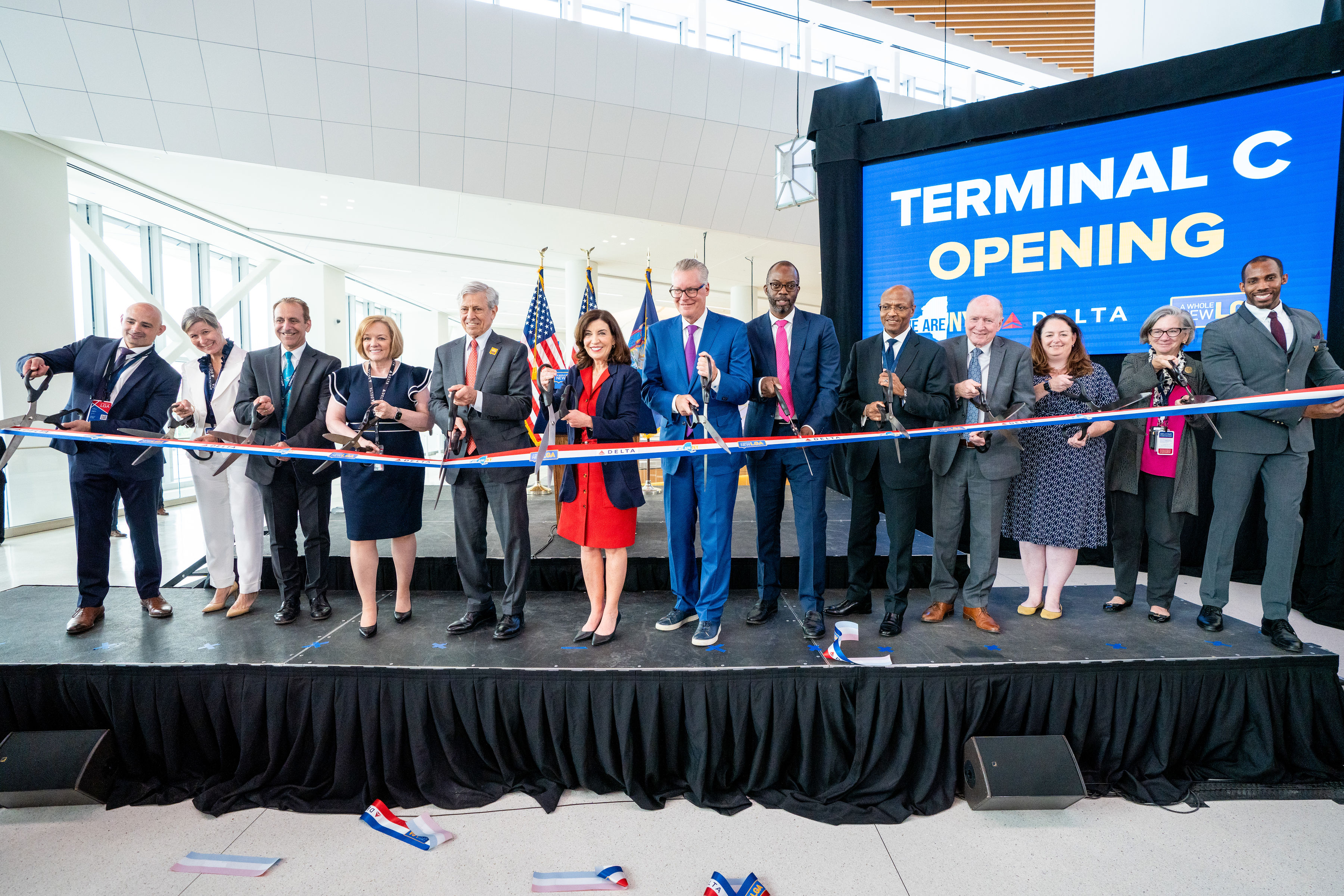 “Today marks a new beginning for Delta customers and employees at our LaGuardia hub with the opening of this remarkable new terminal,” said Delta CEO Ed Bastian.

“It’s been more than a decade since Delta committed to growing – and winning – in New York, and we’ve been unwavering in our efforts to become New York City’s No. 1 airline. It’s thanks to the 10,000 New York-based Delta people that we’ve been able to invest nearly $7 billion in New York airports since 2010, deliver the products and experiences our New York customers deserve, and become part of the fabric of the New York community that means so much to so many of us.”

Delta accelerated construction timelines during the pandemic to deliver this facility to New York customers even faster than anticipated. The airline will fully complete the entire four-concourse terminal by the end of 2024, almost two years earlier than originally planned.

Ultimately, Terminals C and D will consolidate into one state-of-the-art facility, spanning 1.3 million square feet and featuring 37 gates across four concourses. Delta continues to double down on its vision for the future of travel, building airports of the future that are comfortable, easy to navigate and part of an effortlessly connected journey, capable of absorbing and supporting new innovative experiences as technology evolves. Recently, Delta also revealed the completion of the first major phase of its $2.3B Sky Way at Los Angeles International Airport.

“The transformation of a Whole New LaGuardia airport into a world-class destination that is internationally recognized for its beauty is an integral part of our bold vision for a new era in New York,” Governor Hochul said. “The opening of Delta’s $4 billion Terminal C will help provide a superlative passenger experience, easing connections and creating lasting impressions – and it joins the completed Terminal B which we celebrated just a few months ago. Congratulations to all who made today’s milestone possible as we finish creating a LaGuardia airport worthy of New York.”

Terminal C is designed to deliver the efficiency and speed New York travelers often need, allowing them to navigate to and from their gates quickly and intuitively with the latest technologies such as hands-free bag drop, self-serve check-in and Digital ID screening capabilities.

Customers will have the option to check-in via a spacious, centralized lobby, complete with 36 full-service check-in counters and 49 self-service kiosks, or bypass it altogether and utilize the direct-to-security drop-off option to head directly to one of the 11 security checkpoints. Additionally, all five entry points offer baggage drop for easy bag check.

Terminal C is as visually impressive as it is efficient, featuring a world-class art program in partnership with the Queens Museum, showcasing custom pieces from six local artists that share a compelling story of New York’s immigrant history, its people and the importance of the city’s diversity.

Digital art is another prominent design feature; with a massive digital art installation made of 34 lenticular panels, displayed overhead the security checkpoint, while a 238-foot digital backwall in the check-in lobby will feature TSA wait times, wayfinding in both English and Spanish as well as Sky Club volume and gate information
Concourse E is the second of four new concourses to open, with ten new gates, nine of which will be operational on opening day, able to accommodate various narrowbody aircraft types as well as offer larger gate seating areas.

In addition to a gleaming central headhouse and concourse, LGA will house the largest Delta Sky Club in the system, with architectural touches that evoke New York City from the turn of the 20th century, such as harlequin-patterned screens and rich warm metals. With seating for nearly 600 guests to relax and recharge over a sprawling 34,000 square feet (in its end state), the Club features a gourmet kitchen, premium bar, two food buffets and two hydration stations.
Curated artwork throughout reflects New York City’s dominance in the international art scene. Future additions to the Club include a year-round, all-weather Sky Deck, a second premium bar and a third hydration station.

Terminal C also offers a multi-sensory room, providing a calming, supportive environment for customers with sensory sensitivities and their families as they travel.

In support of Delta’s broader sustainability commitments, Terminal C will be LEED® Silver-certified with multiple sustainable elements incorporated throughout including:

LED lighting
Exterior glass that automatically tints based on the weather and time of day
Charging for electric ground support equipment
An ice-making plant that produces ice during off-hours to cool during the day, reducing power demand during peak periods

“In a word, the new Terminal C is magnificent – an architectural gem that dwarfs the facilities it replaces in size, style and functionality,” said Port Authority Executive Director Rick Cotton. “It represents 21st century air travel that is world class in every respect – which can now be said of the entire whole new LaGuardia airport, which six years ago was among the most reviled in the nation. I congratulate and thank Governor Hochul, the entire Delta team for their indefatigable efforts and the many employees of the Port Authority who collaborated to make this a reality. Today proves what our region can accomplish when we really put our collective will behind such an ambitious goal.”
The Terminal C transformation project has employed approximately 9,000 construction workers and hundreds of architects, engineers, inspectors and professional construction management staff on the project to date, in addition to awarding more than 35% of the project’s total contracts to date, to minority- and women-owned businesses.

Delta is LGA’s largest carrier, offering up to 255 daily flights to nearly 70 destinations this summer. The airline’s unique dual-hub position at LGA and JFK allows it to offer New York customers 465 total peak daily departures to more than 120 domestic and international destinations.

The second major phase of the Delta Sky Way at LGA is just one of several recent infrastructure milestones that Delta has unveiled as part of the airline’s decade-long, $12 billion investment to transform the travel experience on the ground and in the air.