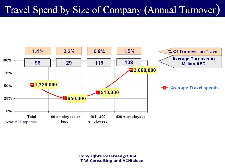 Results from a corporate travel survey conducted in 2004 predict year-over-year growth in 2005 business travel in the United Arab Emirates will maintain 2004 levels, and that travel management companies (TMCs) will continue to grow their important role as helping companies manage their travel budgets through supporting policy compliance.
The survey of corporate travel trends and policies, conducted by AC Nielsen and TRS Consulting and sponsored by Lufthansa Airlines in February-March 2004, interviewed decision makers and senior managers at 52 companies in UAE.  The study was made available to ACTE by Mr. Sundar Vasudaven, Principal Consultant at TRS Consulting and member of ACTE EMEA Education Committee, to share with its members and represents a unique intelligence on the status and sophistication of managed business travel in UAE.
This 2004 syndicated study was available for sale until May 2005 and has now been provided to ACTE by AC Nielsen and TRS Consulting to contribute to the advancement of the business travel industry. According to TRS Consulting this study is the only available one and the only one focusing on corporate travel management.
The surveyed companies, with average revenues of $100 million, represented many sectors, from banking to construction to oil and gas, shipping and service.  The majority (41) had between 100 and 400 employees.
Based on the travel spends of the companies surveyed and the changes they indicated for 2005, the survey estimates that business travel in the UAE should grow 5.5% this year, compared to 5.7% in 2004.  Higher growth is expected for companies in industries such as software where travel is directly related to business generation or execution.
Independent of travel spend, nearly three quarters of the companies interviewed (73%) have a documented travel policy.  The number jumps to 86% for those companies with larger spend, exceeding EUR 335,000 (AED 1.5 million) annually.  Most companies surveyed (63%) audit their travel policy, and many consider MIS reports from travel management companies helpful in monitoring travel.
Nearly 70% of the corporations surveyed said they have not changed their travel policy.  Not surprisingly, the companies that spend more than EUR 335,000 per year have the highest percentage of travel policy changes, at 43%.  Among those who do change it, the most frequent change is cost control guidelines (57%), followed by employee-related policies (43%).
The majority of companies said they did not have stringent requirements for booking executive travel, but nonetheless ask their executives to indicate, on average, 4 or 5 reasons for every trip. Smaller-sized companies require more justification for a trip, most likely because travel costs are a bigger burden for them, of between 2%-3% of total turnover, compared to between only 1%-2% for companies overall. Only half of companies require an executive to state the purpose of travel and less than one-third require them to estimate their expenses beforehand.
Half of the travellers in the companies surveyed travel either once a month or once a quarter; very frequent travel of once a week or more is not prevalent.  Companies spending over EUR 335,000 have upwards of 250 trips per year, or one every second day.  The average trip duration is four days.
The majority (65%) of survey respondents still make reservations using an internal company staff, typically administrators (85%).
Although self-booking via the Internet is a growing trend, it is still very limited. Nearly all companies use at least one TMC, and most using more than one.  10% of survey respondents had a TMC inplant, but that percentage doubled to 21% for companies that spend over EUR 335,000 per year, and is growing.  Only 4% of the companies surveyed have changed their TMCs, even though most say they are moderately satisfied, not delighted, with their TMC’s service.
Indeed, most survey respondents see TMCs as lacking in initiative-taking and innovative travel management.
TMCs can improve their role as travel managers by facilitating the procurement of preferred corporate pricing with hotels and airlines for their corporate clients, given the little direct corporate contact with these entities, especially hotels.  Only 15% of companies interviewed had a contract with a hotel and only a quarter with an airline.  Emirates, KLM and Air India were the three dominant carriers to have corporate contracts.
Ensuring that reservations, ticketing and ticket delivery is available on short notice, for “round-the-clock” service, is another important element to improving TMC customer satisfaction.  After price, quality service and past experience, other important elements in choosing a TMC include MIS reports, travel services and a dedicated account manager.
Three quarters of the companies have a written agreement with their TMC and just over half of them (54%) review the TMC’s performance at regular intervals.
The study is available online at:
www.acte.org
——-