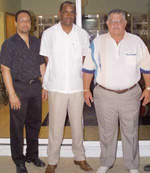 From Caribbean Net NewsROSEAU, Dominica: As the general election campaign in Dominica reaches fever pitch, with just hours remaining before the voters go to the polls to elect a new government, serious concerns are being raised in some quarters regarding funds, reportedly transferred from the Cayman Islands.This news, coming just days ahead of the 2005 election, has tongues wagging, making the matter a main election issue.

Popular radio personality, Dominican-born Lennox Linton, who was reportedly lured back home from neighbouring Antigua where he resides and works, to campaign for the opposition, made detailed reference to transactions relating to the alleged transfer and use of some EC$1 million from a corporation in the Cayman Islands.

Caribbean Net News has confirmed that, following shortly after his visit to China, Prime Minister Roosevelt Skerrit also visited the Cayman Islands in April 2004. Skerrit’s visit has sparked widespread speculation throughout the election campaign as to the real purpose of the visit.

However, the youthful Skerrit has said the Cayman trip was purely for rest and relaxation to prepare for what would be a hot election campaign, but reports suggest that the alleged money transferred from the Cayman Islands was done by persons Skerrit met while there.

As the pressure mounts, Skerrit is being asked to clarify how it is that funds from the Cayman Islands account have been withdrawn by operatives within the ruling Dominica Labour Party (DLP) which has caused Edison James, Political Leader of the United Workers Party (UWP) to suggest that the revelations concerning the Cayman Islands are cause for concern and implicate the country’s Prime Minister in a conspiracy. He also went on to suggest that this has caused international embarrassment for the Government as well as the people of Dominica.

James also disclosed that his party has already been in touch with international forensic experts to delve into the matter in the country’s interest. He said the people of Dominica have been suffering under the DLP for the past 5 years and 90-plus days and are looking forward with great expectation to a UWP Administration, which will put the country back on a path of growth.