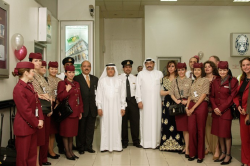 Qatar Airways has expanded its North African network by launching scheduled flights to Tunis and Algiers. The airline is operating three flights a week non-stop between its operational hub of Doha, capital of the State of Qatar, and the Tunisian capital of Tunis. The flights continue onto Algiers, the capital of Algeria.
Qatar Airways’ inaugural flight carried key media from the Middle East and a delegation of airline officials, including Mohamed Saleh Fakri, General Manager Commercial, Fathi Al Shehab, Senior Manager Commercial Operations (Qatar, Levant, Africa) and John Brayford, Regional Manager Qatar and Africa. The inaugural flight was seen off in Doha by His Excellency Jalloul Al Jareebi, Tunisian Ambassador to Qatar, and His Excellency Issa Bikrar, Algerian Ambassador to Qatar.

The new routes are operated with an Airbus A319 configured in Business and Economy, as well as an A300, which has a three-class configuration of First, Business and Economy. The addition of Tunis and Algiers strengthens Qatar Airways’ presence in the North
African market where it already serves Cairo, Luxor, Khartoum, Tripoli and Casablanca.

Both new routes are designed to provide convenient connections for passengers travelling to and from the Middle East, Indian sub-continent and Far East. Qatar Airways Chief Executive Officer Akbar Al Baker said Tunis and Algiers offered a mix of business and leisure opportunities.

“We are delighted to be spreading our wings to these new markets which are underserved from the Middle East,” he said.

“Major exports out of Algeria are oil and gas, so there is a lot of synergy between Qatar and Algeria. And Tunisia has a thriving tourism industry as well as strong commercial opportunities which make this route an extremely viable one for Qatar Airways.”
As part of its launch into the two North African cities, Qatar Airways is offering members of its Privilege Club frequent flyer programme double Qmiles for the first full month of the new flights.

The launch of Tunis and Algiers follows the start of scheduled flights between Doha and Osaka on 31 March 2005. Athens will become the airline’s 63rd destination when non-stop flights are launched to the Greek capital on 15 June 2005. Qatar Airways currently operates scheduled flights from its Doha hub to 62 destinations across Europe, Middle East, Africa, Indian subcontinent and the Far East. The award-winning airline operates a modern all-Airbus fleet of 40 aircraft which will double in size over the next few years following a $5.1bn order for 34 additional Airbus jets. The airline is one of the launch customers of the twin-deck A380 ‘super jumbos’ with four aircraft on order, scheduled for delivery from 2009.

As one of the fastest growing and youngest carriers in the world, Qatar Airways has made significant inroads in the global aviation industry to become an award-winning airline in just a short few years. It is one of only three airlines in the world to be ranked a Five Star carrier for excellent service and high standards by Skytrax, the independent aviation industry quality monitoring agency. Skytrax also ranked Qatar Airways’ cabin crew as the best in the Middle East in 2004 for the second year running and fifth best in the world following a survey of more than two million passengers worldwide.