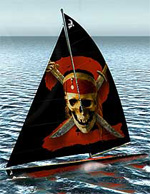 By Ben KilbeyFor the first time in its history the Volvo Ocean Race has struck a deal to promote a Hollywood feature film on one of its vessels. The signing enables Disney to utilise a powerful Volvo Open 70 and adorn the sails with Pirates of the Caribbean: Dead Man’s Chest artwork.

Seven yachts will compete in the round-the-world race starting in Vigo, Spain in early November and ending in Gothenburg, Sweden in the middle of June 2006. During the race there will be a total of nine stopovers. Each boat comes at an estimated cost of US$12 million dollars.

Sources at the VOR headquarters in Southampton (UK) have indicated that Disney shall foot the entire bill. It has been suggested that the world-renowned film company will be seeking partner investors for the venture.

“Given the film’s high seas adventures and nautical themes, this marathon sporting event is a great way to make some waves and generate awareness among the millions of viewers,” said Dick Cook, chairman of Walt Disney Studios, in a statement released yesterday.

Once again Pirates of the Caribbean: Dead Man’s Chest will star Hollywood high roller Johnny Depp as Captain Jack Sparrow along side Orlando Bloom and Keira Knightley. The release will coincide with the completion of the famous race in June 2006.

It is hoped that members of the cast will find the time to participate in some of the sailing.