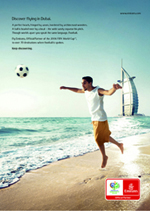 Emirates Airline recently launched its
worldwide advertisement campaign to mark its Official Partner status of the
2006 FIFA World Cup, and already the campaign is winning fans around the
globe.Based on Emirates’ hugely successful and award-winning ‘Keep discovering’
campaign, the advertisements speak the language of the fans and the passion
of football in a truly international and global context. The message of the
campaign is that wherever you go and whatever cultural background you have,
you’ll find people all around the world who have one thing in common: ‘We
all speak one language: Football’.

The campaign, developed by Saatchi & Saatchi in Germany, has been winning
plaudits with fans in online polls across Europe. Readers of Italy’s ‘W&V’,
the leading trade press for marketing, advertising and media, and Germany’s
‘TV Spielfilm’, the leading magazine for TV programmes in Germany, have both
voted the advertisement as among their favourites on air.

‘TV Spielfilm’s’ description of the campaign’s success was simply summed up:
“Sun, beach, fun - there is a language everyone understands”.

Emirates’ sponsorship of the 2006 FIFA World Cup is a major part of the
airline’s ongoing marketing focus of using sports sponsorship as a way to
reach it passengers and to connect directly with them and to maximise
exposure of Emirates as a truly global brand - and this campaign perfectly
reflects that strategy.

HH Sheikh Ahmed bin Saeed Al-Maktoum, Emirates’ Chairman said: “For
Emirates, sponsorship is an important means of reaching out to our
passengers worldwide, through sharing and supporting their interests. Our
massive investment in football underscores our confidence in the continued
international growth of Emirates, and in the growth of Dubai as a regional
hub for business, tourism and sports.”

The multi-million dollar advertising campaign which comprises TV, cinema,
print, outdoor and online, taps into fans’ passion for football as well as
reinforcing the nature of Emirates as a global airline through clever and
original visuals.

The television ads can be seen across the globe on CNN, BBC World, Discovery
Channel, National Geographic, Euronews and Eurosport, among others, and will
run from now until the end of March. The print campaign which runs in
conjunction with the TV ads will be seen in target publications around the
world including ‘The Sunday Times’, ‘The Daily Telegraph’, ‘The Sydney
Morning Herald’ and other major international newspapers.

The advertisements, which are set in four different destinations which
Emirates flies to and were rolled out through Emirates’ impressive global
network of agencies, represent key regions including Dubai, South Africa,
Hong Kong and Italy. In each case the story revolves around travellers
discovering they have one thing in common which unites them with the locals
in each destination - a love of football.

Mike Simon, Emirates’ Senior Vice President Corporate Communications, had
this to say of the campaign’s success: “Emirates believes that sport
transcends cultural and language barriers, and is an important means of
fostering interaction between the different peoples of the world. Football,
with its widespread popularity worldwide, is the perfect vehicle for this
purpose - and the 2006 FIFA World Cup, the world’s largest sporting event,
is the perfect environment.”

“The ads are themed around the image of a person running with their arms
outstretched, mimicking an aircraft, which cleverly combines the culture of
football with the awareness of Emirates Airline. Our Corporate
Communications Department is working closely with more than 100 PR and
advertising agencies around our network to optimise our investment in the
sponsorship of the 2006 FIFA World Cup.”

The campaign perfectly combines the excitement and emotional aspects of
travelling and having new experiences, with the joy and excitement of the
world’s most popular sport. The message of ‘Keep discovering’ could not be
clearer or more appropriate for Emirates - the first-ever airline partner
for 2006 FIFA World Cup.
——-