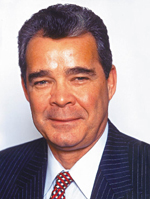 Pegasus Solutions
has announced the expansion of its longstanding relationship with the Caribbean Hotel Association (CHA).Ê Starting this year, CHA member hotels now have access to the full range of representation service options offered by Pegasus, including distribution and marketing services in the Unirez by Pegasus and Utell by Pegasus offerings.Ê

The enhanced relationship between the CHA and Pegasus was announced today at the CHA’s annual conference in Montego Bay, Jamaica.Ê Since 1992, more than 100 CHA hotels that are also Utell by Pegasus members have used Pegasus’ central reservation, distribution and marketing services under the moniker CHARMS (Caribbean Hotel Association Reservation Marketing Service).Ê In 2005, CHARMS hotels have the option to implement the Unirez by Pegasus service, which features integrated self-service tools that allow staff to manage distribution channels, load rates, and generate reports with speed and accuracy.

The expansion of service options to CHA members comes after an extremely successful year for CHARMS hotels.Ê Pegasus-related services drove $6.7 million in revenue for CHARMS in 2004, an increase of 38 percent over 2003.Ê The majority of the increase was recorded in global distribution service (GDS) bookings, with travel agents around the world using the well-known UI code to reserve rooms in CHARMS hotels.Ê Pegasus also facilitated Internet and voice bookings that contributed to revenue growth.

“Pegasus Solutions has a consistent track record of delivering superior electronic distribution and marketing services to hotels throughout the Caribbean,” said Berthia Parle, MBE, president of CHA.Ê “The addition of Unirez by Pegasus services gives CHA hotels easy-to-use technology to efficiently manage inventory in multiple selling channels.Ê Leisure travelers use an ever-widening range of channels to book their vacations, so it’s critical for CHA hotels to use every possible tool to raise their profile and maximize their reach to both travel agents and high-volume Web sites.”

CHA hotels can join CHARMS at any time to gain access to both Utell by Pegasus and Unirez by Pegasus services.Ê Pegasus is the largest provider of hotel representation services in the world, with more than 8,000 independent hotels utilizing the company’s distribution, marketing and reservations services.Ê
——-