If you have kids of pre-school age then you will know all about the adventures of Peppa Pig. Along with her brother George and her parents, Mummy Pig and Daddy Pig, she lives in a charming world that has totally captivated the current generation of under fives.

Since the first series in 2004, Peppa Pig has grown into a phenomenal global success and is now screened in 188 countries. Last Christmas, Peppa Pig was Britain’s bestselling toy brand for under-fours, overtaking Thomas the Tank Engine for the first time. And there’s also a Nintendo game and a live show.

The latest addition is Peppa Pig World, a theme park that brings to life the adventures of Peppa and her family.

Costing £5 million to build, it forms an extension to Paultons Park, the family theme park on the edge of the New Forest.

The creators of Peppa Pig have an incredible insight into what makes little minds tick. And just like the series, they’ve managed to create the same magic here.

The three-acre site is a true infant wonderland, with seven rides inspired by the TV series. For Dinosaur Adventure you ride George’s favourite toy dinosaur and zoom across a lawn. Daddy Pig’s Car Ride lets the kids sit at a steering wheel and “drive” the family through a magical kingdom. 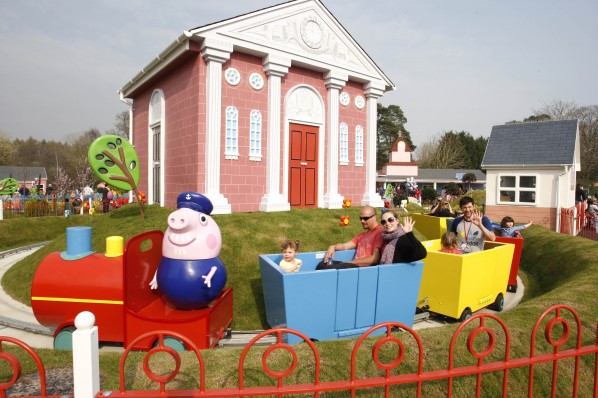 (Fun for all the family at Peppa Pig World)

The rides are all suitable for children over the age of one, as long as they are accompanied by an adult. 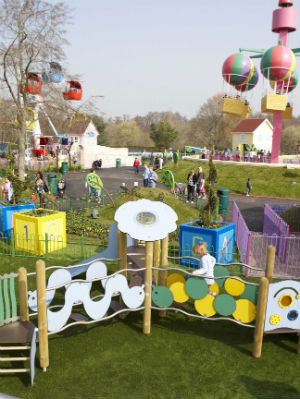 There are also fun animated attractions, indoor and outdoor play areas. But when the lifesize Peppa Pig and George make a VIP tour of the park, the children go absolutely crazy, trying to hug them or hold their hands.

As well as Peppa Pig World, there are a host of other fab attractions at Paulton’s Park.

Paultons is a family run theme park, and it shows. The atmosphere is really friendly and there’s a charming old-fashioned ambience that you no longer find at the big corporate parks such as Chessington World of Adventures and Thorpe Park.

And it’s not all about younger children, either. The park has opened a number of new high-adrenaline rides and attractions in the last few years including: EDGE, the first ride of its type in the UK which swoops and spins through the air reaching a height of 15 metres on a giant disc that travels along a 90-metre track with a ‘camelback’ hill.

There’s also The Cobra, a unique family coaster and Paultons signature ride, Water Kingdom, an 8,500 square foot kids’ splash park featuring more than 20 different ways of getting wet; and The Sky Swinger, a ride with nostalgic appeal that twirls and tilts as it lifts riders six metres above the ground on an aerial journey.

You really need several days to explore all the fun of Paulton’s Park, and Peppa Pig World. It’s one of those dream places that the kids will want to go to again and again.

Visit www.peppapigworld.co.uk to find out more. And for Paultons Park go to www.paultonspark.co.uk.