London is a great place to spend the weekend. Obviously, there’s plenty of art and culture to soak up, as well as some of the world’s best places to eat and drink. And it always feels cosmopolitan, thanks to the influence of its international population and the cultural influences that brings to a city.

Many people think London is expensive and it’s certainly easy to spend a lot there. In fact, London came out as the second most expensive city in a statistical comparison of some of the world’s most iconic cities by ebookers. The price of life in different cities such as London, New York, Paris, Dubai and Singapore was measured in things like the cost of a beer, a meal out, a night in a 3 star hotel and the price of a cinema ticket.

However, though you can spend out on accommodation and doing lots of sightseeing, it is possible to balance the spending by mixing in some free activities such as visiting some of the world’s best museums.

Culture for free
Whatever your age, the Natural History Museum is a great place to visit, no matter how old or young you are. And it’s just down the road from the V&A Museum, where current exhibits include Shoes: Pleasure and Pain, and The Fabric of India, an insight into Indian handmade textiles. There’s also the Science Museum – which is a must if you’ve got the kids in tow. All of these museums are free to enter – and each could take a whole day to see properly.

A Bird’s Eye View
If you want to take in the whole of London from a vantage point, there are a number of options. Probably the best known are the London Eye and the Shard near London Bridge. Booking ahead is essential if you want to avoid too much queuing and Shard tickets are also cheaper when booked in advance. Alternatively, save on the ticket price and combine taking in the view with a drink at one of London’s many rooftop bars such as the Roof Gardens at Babylon in Kensington High Street or Vista, which overlooks Trafalgar Square. 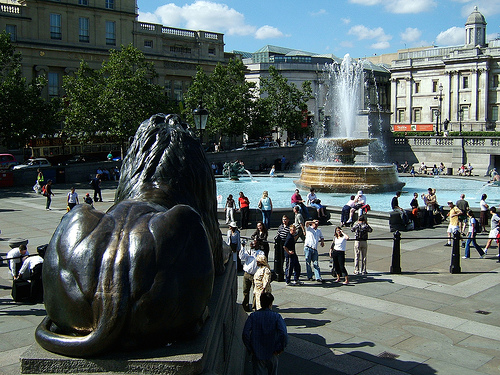 Showtime
London’s theatreland has so much to offer in terms of choice and variety, and if you’re in town, you should try to get to one show at least. Current hits on in London include musicals such as Jersey Boys and plays like the Curious Incident of the Dog in the Night-time and The Audience. For West End ticket deals try comparetheatretickets.com or if you’re willing to be spontaneous and watch whatever’s available, then theatres often sell next-day tickets at much reduced prices.

Any weekend in London is going to be costly, but if you can do some things for nothing, and get the best deals available on others, you don’t have to break the bank to have a great couple of days there.