The history of gorilla tourism in Africa can be traced back to 1902 when Robert Von Beringe a Germany Capt. and the first European to observe mountain gorillas along Mount Sabyinyo. In 1903, they were scientifically termed as Gorilla gorilla beringei by Matschie and in 1925, Carl Akeley convinced King Albert to establish Albert National Park which became the first park in Africa. Today, majority of visitors on African safari come mainly for gorilla tours and tourism.

Where gorillas are found in Africa
Gorillas in Africa exist in different species and sub-species. They thrive in different parts of Africa. Uganda, Rwanda and the Democratic Republic of the Congo (DRC) are premier destinations in Africa and the world at large where mountain gorillas only exist. Today, mountain gorillas (gorilla beringei beringei) fewer than 1063. In Uganda, there are two national parks where you can see mountain gorillas that is Bwindi Impenetrable National Park and Mgahinga Gorilla National Park. The two protected areas are set in the extreme Southwest, about 9-10 hours’ drive away from Kampala capital city and 3-4 hours’ drive from Kigali capital city.

There are two ways that you can see mountain gorillas in Uganda-either you take part in gorilla trekking or mountain gorilla habituation experience. This makes Uganda an exceptional gorilla destination in Africa to visit to see mountain gorillas. Over 21 gorilla groups are available for visitors to trek and some are designated for research although they can be trekked depending on the demand. The habituated gorilla families in Uganda include Nshongi, Kahungye, Katwe, Nkuringo, Kutu, Busingye, Mubare, Habinyanja, Bushaho, Oruzongo, Bitukura, Christmas, Kyaguriro, Bikingi, Bweza, Mukiza, Mishaya, Mucunguzi, Rwingi and Rushegura. These are found in Bwindi Impenetrable National Park and Nyakagezi group is the only family open for gorilla trekking in Mgahinga Gorilla National Park.

In Rwanda, mountain gorillas exist only in Volcanoes National Park which is located in the Northern Province. It is the most accessible gorilla destination, about 2 and half hours’ drive from Kigali capital city. Volcanoes National Park became popular after the Dian Fossey’s film and book-Gorillas in the Mist. This park was established in 1925 and it extends up to 160sq.kms.

Gorilla treks in Volcanoes National Park are conducted in anyone of its ten habituated families; Amahoro, Susa A, Karisimbi (Susa B), Hirwa, Bwenge, Agashya (Group 13), Kwitonda, Ugenda, Sabyinyo and Umubano. 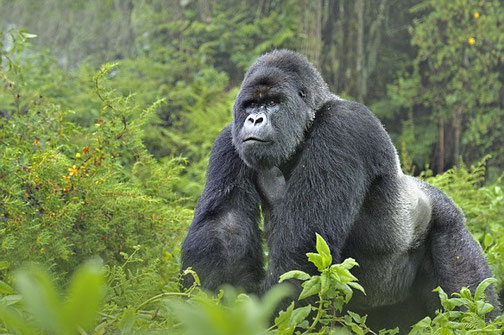 In the DR Congo, gorilla tourism is conducted in the Virunga National Park which hosts about 300 mountain gorillas. This park features among Africa’s oldest national parks-it was gazetted in 1925 and sits in an area of about 7800sq.kms. The habituated gorilla families in the Virunga National Park include Munyaga, Nyakamwe, Bageni, Nyakamwe, Rugendo, Mapuwa, Kabirizi and Lulengo. 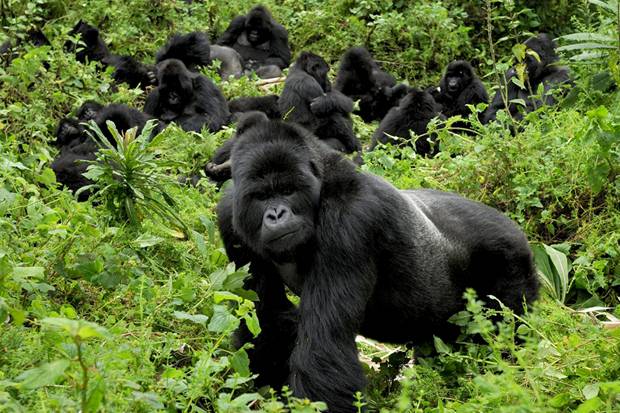 When to go for gorilla tourism in Africa
Gorilla tourism in Africa is open to visitor throughout the year given Africa’s favorable weather and climatic conditions. However, the dry season is considered the best time to visit Africa for gorilla tourism. There are 2 dry seasons experienced in Africa and visitors on gorilla safari need to put them into consideration before embarking on actual trip. They occur between June, July, August, September and December, January, February. The advantage of visiting Africa for gorilla tourism during the dry months of the year is that most gorilla destinations experience low/no rainfall and the habitat is kept relatively drier thus making it easier for trekkers to wind through the dense rainforest and steep slopes while in search for mountain gorillas.

This doesn’t mean, it impossible to embark on gorilla trekking during the wet or rainy season. The wet season which is also known as the low season occurs in the months of March, April, May and October, November.  These months are characterized by heavy rains and plenty of forage for gorillas to feed on. Given the availability of abundant food, these creatures remain within and trekking them takes shorter time than during the dry season when they move to long distance to search for what to feed on.

What you should expect on gorilla trek in Africa
Gorilla tourism in Africa involves exploring Africa’s jungles and rewards trekkers with magical view of gorillas our closest relatives while in their natural habitat.  On gorilla trek, you are required to get up early to make preparation at your respective lodge and later, set off with some packed lunch and bottled drinking water to a respective gorilla park headquarters where you will be briefed on the set guidelines for gorilla trekking. This will be done by a park official or park ranger guide. It also involves assigning visitors a gorilla group to trek and at 8:00am, the actual trek starts and on the way, you will have amazing sights over birds, plants and several primate species. On finding your gorilla group, visitors are given an hour to make their dreams come true, take as many photos as you can. Later, return to the lodge to have a rest. Amazingly, you can incorporate gorilla tourism with other experience for instance cultural encounters, birding, adrenaline adventures at the source of the Nile at Jinja, game viewing to mention but a few. 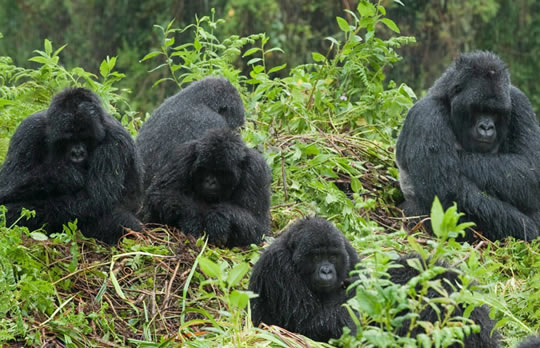 Gorilla trekking rules and regulations
Prior hitting the jungles to look for the assigned gorilla family, the park official will brief on you on the set safety measures. These guidelines play a significant role not only in safeguarding gorillas but also trekkers and ensuring you have the most enjoyable gorilla safari experience in Africa. Some of the essential rules and regulations to observe while on gorilla trek in Africa include.

➢ Persons above 15 years are considered eligible to purchase a gorilla permit in Uganda, Rwanda and DR Congo.
➢ No flashlight camera during photo taking.
➢ Keep within your group to avoid getting lost in the jungles.
➢ Don’t eat, smoke or drink in the presence of gorillas.
➢ Leave the habitat the way you found it or in a better state. Bury every human waste as directed by the park official.
➢ In case of illness, don’t go to trek gorillas. In case of cough, please make sure you cover your mouth and nose when sneezing.
➢ 8 visitors are assigned to trek one habituated gorilla family.
➢ A distance of 7 meters should be kept away from gorillas.
➢ A gorilla permit is a must-have tool if you have any plans to embark on gorilla tourism in Africa.

In summary, gorilla tourism in Africa has become one of the main reasons thousands of visitors confine into African continent. Trekking to see gorillas in Africa is a life changing experience worth taking part and for lasting memories, Uganda, Rwanda and DR Congo should be a must-visit and you won’t be left in regrets.