Last week Virgin Atlantic staked its official claim to having the world’s most attractive cabin crew. This week its sister airline Virgin Blue was joined by a supermodel – with Australian fashion icon Elle Macpherson among the pilots and crew to model its new uniforms.

Hundreds of fans turned out to watch “The Body” strut her stuff – although she kept her face firmly hidden behind a pair of over-sized aviator sunglasses.

Macpherson attended the show instead of Virgin boss Sir Richard Branson, who has been unable to travel following a skiing accident in Switzerland.

The 47-year-old model and businesswoman said: “Richard wanted to be here today. He had a skiing accident and has just had an operation on his knee.”

“I have so much respect for Richard because he captains his ship with integrity and with a sense of humour, and I really look up to him.” 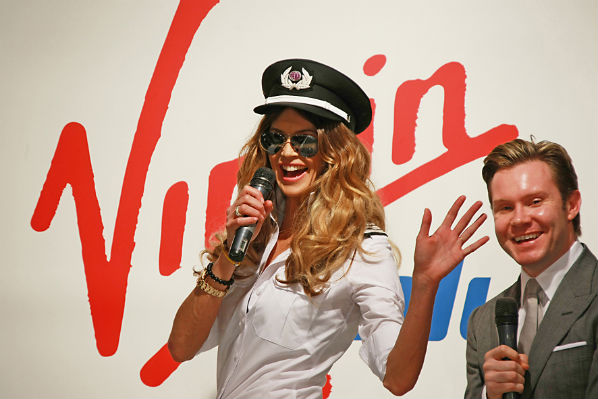 Designed by Australian designer Juli Grbac, the new uniform represents the first step in a series of exciting changes for Virgin Blue in 2011.

Danielle Keighery, Virgin Blue Group Executive of Corporate Communications, said the airline was redefining style in travel with their designer uniforms, enhanced levels of guest service and a new range of products and services still to be revealed.

She said: “I took inspiration from the glamour of flying in the 1960s and gave it a contemporary edge to fit Virgin Blue’s new brand positioning. I worked closely with Virgin Blue to create the ultimate design that would not only look sophisticated and have that wow factor, but be comfortable and of superior quality.”

Business class
The airline also announced that it will offer business class seats to all Australian capitals by year-end to diversify its earnings away from the competitive holiday travel market.

Chief Executive John Borghetti said: “We won’t have the whole fleet done by the end of the year but we will have enough done to serve the capital cities of Australia.”

Virgin Blue wants to boost its share of the domestic business travel market to 15-20 percent from around 10 percent by mid-2013, Borghetti added.

The announcement came as the carrier unveiled a 62 percent fall in first half profit and said the second half is expected to be challenging.

“I think the next six months are going to be very difficult while they rebuild Queensland and consumer confidence comes back,” Borghetti added.

An earthquake that shook the New Zealand city of Christchurch this week is expected to hurt revenue but it’s too early to tell to what extent, he said.

Virgin Blue’s revenue rose 12 percent on-year to A$1.69 billion in the six months to Dec. 31 but flight disruptions caused by bad weather in its home state of Queensland and a booking system outage drove net profit down to A$23.8 million from A$62.5 million.