Hotels, bless them, no matter how hard they seek to brand themselves as technologically cutting edge, they are always slightly behind the curve.

No sooner have they invested thousands of pounds installing iPhone docking stations in every room, then the designers at Apple upend everything with a new sized jack.

The best laid plans lay in ruins and they have to begin the cycle again.

The answer, of course, is to bring your own technology with you – be it be Chromecast to broadcast your own content to the widescreen televisions, or Skype enabled smartphones to cut out the staggering costs of long-distance calls some hotels still try and extract.

In the audio sphere, travellers used to have to bring their own CDs to slip into the stereo, breaking the ominous drone of the air conditioning with some personal favourites.

But no longer. Not only are CDs obsolete (well, at least, to people under 40), but it is now possible to bring high-quality digital sound with you wherever you are.

And that is where comes in KitSound comes in, offering a range of exquisite audio equipment sure to enhance any trip.

Road-testing both the Hive 2 and Flair models on a recent trip, it is safe to say both are nothing short of exemplary.

The first the has a punchy, crisp sound and serious audio potential, certainly more than you’ll need if you don’t want to wake up the neighbours and get in trouble with hotel management.

With its 40mm active drivers and digital amplifier, the listener gains 12 Watts of sound that deliver warm rich bass notes alongside a controlled midrange and a delicate treble.

With 12 hours of play time it’s also got all juice you’ll need while getting ready for that night out on the town.

As an added extra, its call-handling capability means that if someone rings you while you are listening, the speaker transforms itself into a microphone and loudspeaker. 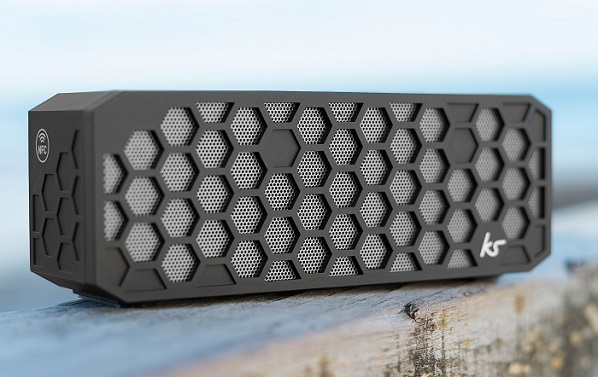 The second is a speaker that sounds as luxurious as it feels, featuring two connectivity methods and a passive bass radiator, with users able to connect through Bluetooth using the soft touch controls or the 3.5 mm aux-in cable.

With ten Watts of power the listening experience is again crystal clear and easily enough for the traveller on the move.

Synced it with a Premium Spotify account and it’s possible to have essentially any track you want, any time, anywhere! What a world.

The exterior of the Flair has the same quality and attention to detail, with tactile felt and a soft touch handle.

What’s more, the lightweight design makes the Flair the perfect pick up and go Bluetooth speaker, so whether you want to show off your style in the park or on the beach, it is ready for you

These types of devices have been around for a while now, but it feels as though the technology is maturing.

No more gathering round a tinny little speaker in the centre of the table, these new KitSound devices have the power to dominate a room and revolutionise the travelling experience.

KitSound has had an obsession with perfection for over eight years, and that has led to the creation of a wealth of audio products: from soundbars to radios, headphones to speakers.

The brand is committed to achieving one shared goal: bringing people closer to their music.

Their developers and audio engineers spend hours crafting and honing the sound they, and only when a product has met the highest of standards and expectations do they release it to the world.

That care and attention to detail has contributed to KitSound becoming one of the UK’s fasting growing audio brands.