East Nusa Tenggara is the southern-most province of Indonesia, comprising more than 500 islands, some 42 of which are inhabited and are home to more than five million people.

Unlike the rest of Indonesia, which is predominantly Muslim, East Nusa Tenggara is largely Catholic, owing its religious heritage to the Portuguese and Dutch presence in the 18th century.

To the west of the province is the island of Flores.

Until recently its port town of Labuan Bajo mainly served as a gateway to other islands, such as Komodo, famous for its giant lizards.

However, in part thanks to the efforts of the Indonesian tourism ministry, more people now tend to stay longer to explore what Flores itself has to offer.

If you’re in the market to walk a path less travelled, then Labuan Bajo is a good place to start - with its fantastically tranquil beaches, exotic wildlife and remote village homestays, it is a perfect place to get away from the noise of Bali. 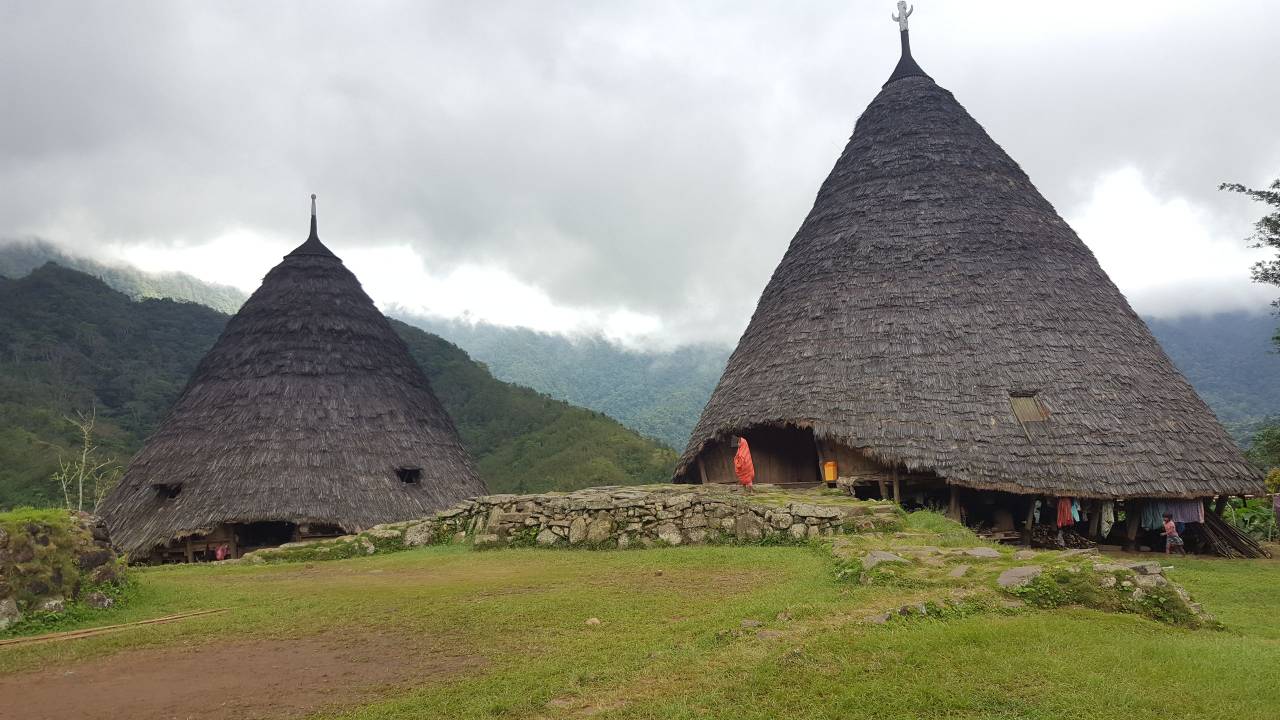 The traditional village of Wae Rebo lies some 108 kilometres from Labuan Bajo and is situated 1,200 metres above sea level, deep in the Todo rainforest.

Since its refurbishment a decade ago, the village has been transformed from near obscurity to one of the main sites promoting tourism in Flores.

So successful has it been, the village was a proud recipient of an award from UNESCO in 2012.

We set out at dawn aiming to get to the village just in time to catch the sunset, which our guide promised was pretty spectacular.

The first five hours of our drive went somewhat smoothly.

We stopped for petrol in a nearby town on the way to Ruteng and witnessed four men shaking their car from side to side in front of us - ‘to measure the amount of gas in the tank’ we are told.

We were left to only admire their ingenuity.

It seems it is not often that a tour bus full of pasty European journalists passes through these parts and the local children seemed to find this especially amusing, waving and shouting greetings at our tinted windows.

Once we reach the foot of the mountain, the real test begins.

As we slowly but surely start climbing up the mountain road, which has not yet been scheduled for refurbishment, a number of large mudslides leave deep rifts across the slopes, meaning we have to opted for scooters instead.

While the road opens to breath-taking views of thick greenery, the vista more striking with each curve of the muddy track, it soon becomes clear things are going to get tougher.

What’s left of the road finally ends three hours later and we continue on foot.

Armed with walking sticks, head torches, panama hats and smothered in bug repellent, we bid farewell to our self-esteem and begin our ascent.

The narrow trail, formed by generations of the Wae Rebo community climbing up and down the slopes, leads us steeply but steadily to the village.

The route is both remarkable and precarious: its steep, slippery at times and in many places obstructed by debris and landslides – a guide is compulsory.

As we slowly climb up the path, we try not to feel discouraged by the friendly Wae Rebo natives in their late 60s sprinting past us in only in flipflops and quite often carrying huge sacks of rice on their heads. 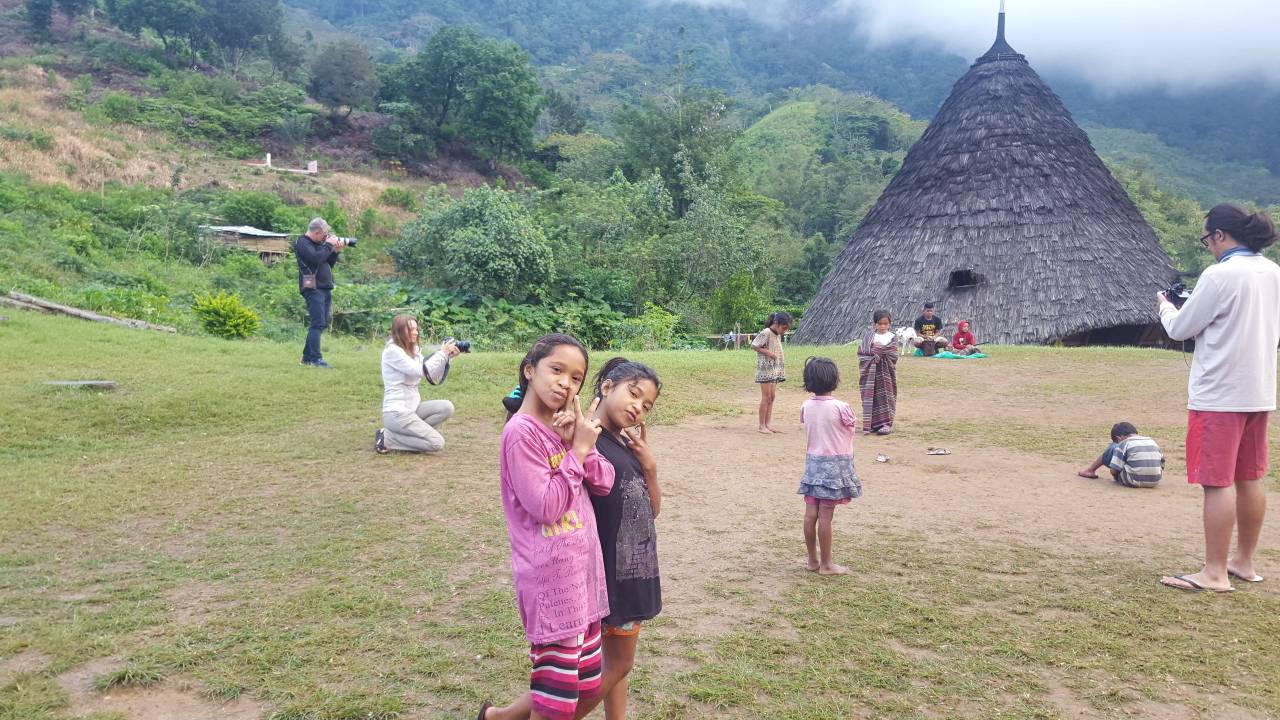 We arrive after dark to be greeted by the village elder in a short but sweet welcoming ceremony in the main building.

He asks the forest spirits to allow us to stay overnight and mixes in some information on the ground rules of our stay.

The village comprises of seven conical drum houses (or Mbaru Niang) which hold up to eight families each.

The distinctive houses were once the traditional village dwellings of the Manggarai people, but today Wae Rebo is the only village that continues to maintain (with a little help from the government, to the tune of about £200,000) the typical Mbaru Niang.

The house has five levels, with each level designated for a specific purpose.

The first level, called lutur or tent, is the living quarters of the extended family.

The fourth level, called lempa rae, is reserved for food stocks in case of drought, while the fifth and top level, called hekang kode, is held most sacred, a place make offerings for the ancestors.

Not too long after we finish our dinner, the electricity generator shuts off leaving the village to be illuminated only by moonlight.

The night sky above the silhouettes of the houses is like something out of a fairy-tale - stars are hanging so low and radiate so much light it seems as if they are almost within reach.

It’s almost a waste to be going to sleep, so some of the tired group stay up until dawn trying to encrypt this wonderful image into our memory for good. No one knows exactly when the Wae Rebo village was founded, but it is presumed the first settlers arrived some 1,500 years ago and that today’s inhabitants are their 18th generation of descendants.

Prior to that, the community had migrated from place to place across rural Manggarai.

Around 50 head members inhabit the village, with the remaining 638 choosing to live at the foot of the mountain, where the positive impact of tourism is evident in the form of new brick housing in different states of completion scattered among older bamboo huts.

Wae Rebo is a farming community growing coffee and vegetables, while chicken, rice and salt are brought in from the outside.

Since the renovation, and coupled to the promotional efforts of the Indonesian tourism ministry, the village has seen a steady growth in tourism, with China, Japan and Australia still leading the way.

Nowadays the village hosts around 20 tourists overnight, with some staying for as long as one week.

As well as the magical scenery, the village also offers activities in the daytime, including a coffee plantation tour, an excursion to Cunca Nawang waterfall and a walk around the village where travellers can take part in mbata singing, caci dancing and penty ceremonies (provided the locals are not in a period of mourning when all recreational activity stops for 40 days). It is not easy running such an enterprise without any means of communication apart from face-to-face.

Tourist board secretary, Joseph Katup, explains: “All communication with the travel agents is done in the city by a Wae Rebo representative, who then makes their journey up to the village to communicate the information to the tourist board, who in turn make the necessary preparations.

“All guests must obtain approval from the village elder before arrival.”

Despite the remote location of the village, Wae Rebo is now one of the main tourist destinations in Indonesia.

Some more earnest travellers might find the location has become to commercialised, however, the tourist board to has done well to preserve a high degree of authenticity and chatting with the locals this certainly seems like a living, breathing place.

For more on visiting the Wae Rebo village head over to the official Wonderful Indonesia website.