Launching a new temple dedicated to cultural entertainment in the heart of Beirut might seem counterintuitive at the present time, an endeavor for an adventurous, postmodern-mind.

In this part of the world, where civilizations became subject to merciless destruction by – medieval times if not more ancient – raging barbarian hordes, Michel Elefteriades took on the role of Herzog’s Fitzcarraldo who had decided to build an opera in the middle of a jungle.

Elefteriades wanted to protect his cosmopolitan newborn venue from the iconoclastic vandals; this is obvious when reaching the new MusicHall.

Its location, just above the sea on the waterfront of Lebanese capital Beirut will remind any architecture connoisseur of a fortress of Vauban with an ‘esthétique carcérale’ approach.

It is surrounded by piled rusty containers just like the ones used as protection on frontlines during the civil war, and big dunes where some wild trees grow, reminding us of Beirut’s famous green line. 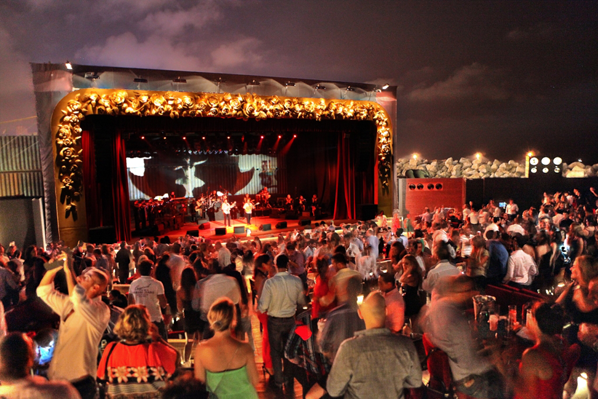 On the other side of the wall, a couple of majestic olive trees lay down their symbolism on the harmonious reign intramuros; the contrast between the external post-apocalyptic, concentration camp-like vision and the baroque interior is obvious with dominant colors on the inside such as the deep red velvet and the gold of the roses adorning the exuberant proscenium arch.

In this safe haven, cultural ambassadors of great music genres from all around the world will find shelter and pass the flame of the legendary Lebanese nightlife, before the turmoil, onto the next generation.

The crowd is elite, drinking the night away in an air of casual sophistication, applauding acts that perform for fleeting moments before being superseded by something even more spectacular.

Once again, the Emperor strikes and presents a groundbreaking project, where culture, arts, music, politics, philosophy, sociology, and aesthetics copulate for our greatest pleasure and the good of humanity.

There is more information on the official MusicHall Waterfront website here.