Visiting Mauritius for the World Travel Awards Africa & Indian Ocean Gala Ceremony, Breaking Travel News editor, Chris O’Toole, here takes a flying tour of the island to see what is on offer to luxury travellers from around the world

For many travellers, Mauritius exists as an idea, the perfect holiday destination always just slightly out of reach.

The island is a synonymy for luxury, for adventure and for wonder, that once-in-a-lifetime experience that only the super wealthy get to enjoy.

So, imagine my feelings when I stepped off the plane at Sir Seewoosagur Ramgoolam International Airport just outside of capital Port Louis earlier this month for a lightening tour.

Even the ride down to the Indian Ocean island had been a pleasure, with Air Mauritius having recently expanded its fleet to include some of the most modern jets available.

Recognised as the Indian Ocean’s Leading Airline, the carrier took delivery of its first Airbus A330-900 in the spring.

The national carrier of the republic of Mauritius thus became the first A330neo operator based in the southern hemisphere, and the first airline in the world to operate a combination of both the A330neo and A350 XWB – a real milestone for aviation in the region.

For passengers it means an improved product, in both business and economy class, while the environmental impact of local aviation sector has been reduced, with Airbus claiming the plane is a quarter more fuel efficient than its predecessor.

Air Mauritius chief executive, Somas Appavou, explains to Breaking Travel News: “I strongly believe that with the addition of the A330neo to our fleet, Air Mauritius will further reinforce its focus and emphasis on the customer who are at the very core of our business model.”

The upshot is I arrive feeling refreshed and ready for adventure. 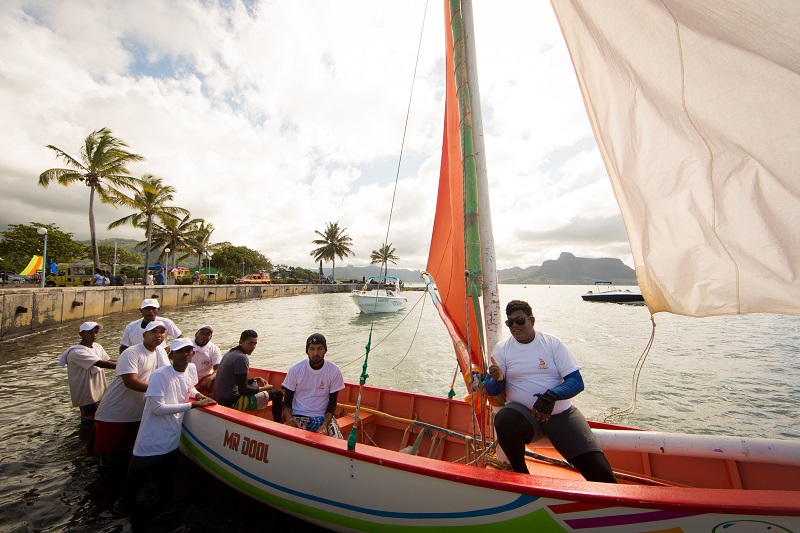 Once the main business of my trip, attendance at the World Travel Awards Africa & Indian Ocean Gala Ceremony is complete, I have just a few hours to explore the island and off I set.

First up is the heritage regatta, taking place at Mahébourg, a village on the south-eastern coast of the island.

Mauritius is known for its love of sailing, with the turquoise waters of the surrounding Indian Ocean creating an exciting playground on which to explore.

Today a dozen colourful boats are lined-up a hundred metres or so offshore, waiting for the signal to begin their race around the island.

With their colourful sails and folkloric names, these races attract local Mauritians of all ages and are the very definition of the “authentic” experience that has come to be seen as the holy grail of travel in recent years.

On land there is a carnival atmosphere, with a live band, food stalls selling some ambiguous snacks I was not brave enough to sample and cold beer.

With the sound of the horn the boats lean into the wind and disappear out of view – it will take a few hours for the winner to return, but we have to rush off to our next location. 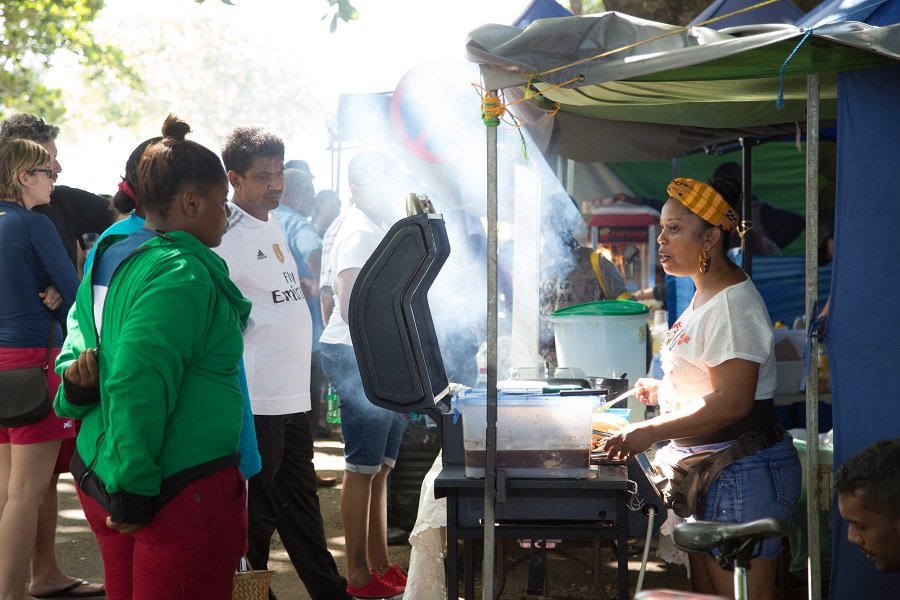 With the island recognised as the Indian Ocean’s Leading Destination, it is its natural beauty that is considered the star attraction.

Top of the list is the Black River Gorges National Park which extends over 16,680 acres and provides a haven to highly endangered native plants and animals.

The location plays home to around 311 species of native and endemic flowering plants and nine species of birds that can only be found in Mauritius.

During our flying visit it was the views over the island that caught the attention, however, with dense jungle spreading in every direction.

Guests can walk along a number of dedicated trails inside the gorge itself and can even hike up to the plateau. 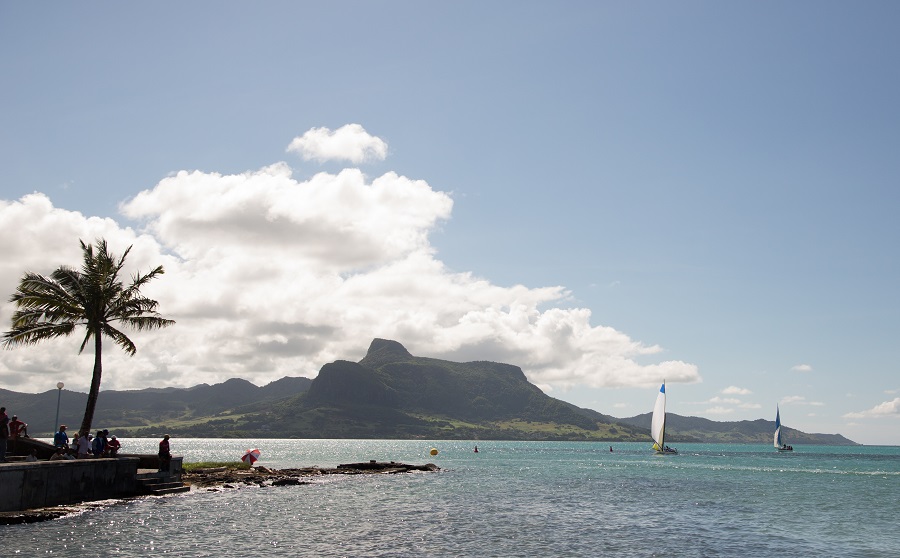 For the experienced, both the Le Pouce and Pieter Both mountains are over 800 metres tall and offer great hiking opportunities.

Both forms part of the Moka Mountain Range and if scaled offer the best views over the island.

On route is the Grand Bassin, also known as Ganga Talao.

It is one of the rare natural lakes in Mauritius, formed inside the crater of an extinct volcano and is a renowned pilgrimage place for Mauritians of Hindu faith.

Every year in February, during the Maha Shivaratri week, thousands of Hindus walk miles from every corner of the island to bring their gifts for lord Shiva.

For the rest of the year it is a place of quiet contemplation and well worth checking out as you travel around the island. 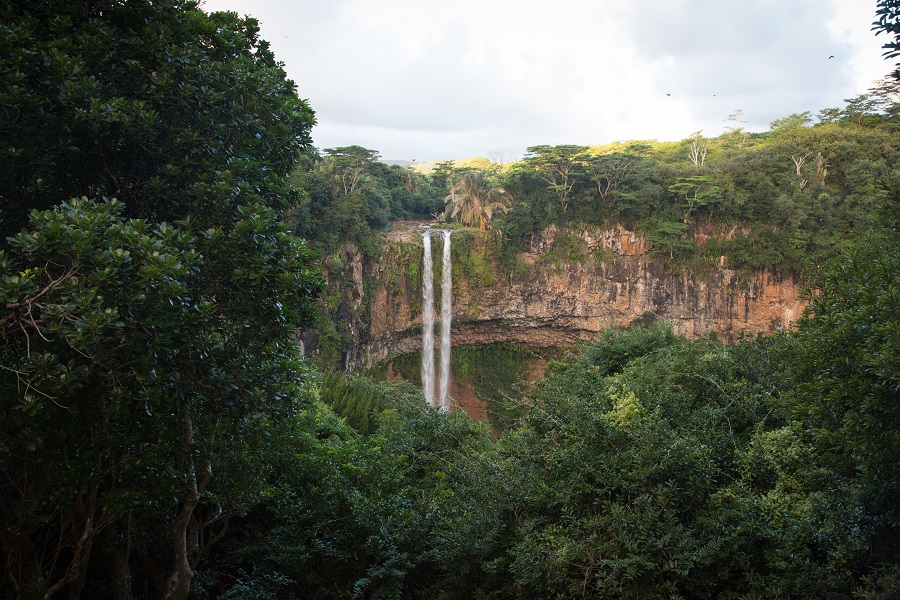 After a quick stop for lunch at Le Bois Cheri Restaurant – a stunning restaurant overlooking the surrounding tea plantations and offering the latest in Mauritian cuisine – we headed for the most famous attraction on the island.

The seven-coloured earth of Chamarel is a unique volcanic geological phenomenon which today looks like an undulating kaleidoscope – with multi-coloured rocks erupting from the ground.

Chamarel itself rises 283 meters above sea level and is reached by a panoramic route, which cuts through the luxurious tropical forest surrounding it.

After visiting the attraction, we has time to take in the picturesque Church of St. Anne, which was built in 1876.

Located in a typical Mauritian village, it is well worth the detour for its family restaurants, and the drive back through the scenic Chamarel to Baie du Cap is magical. 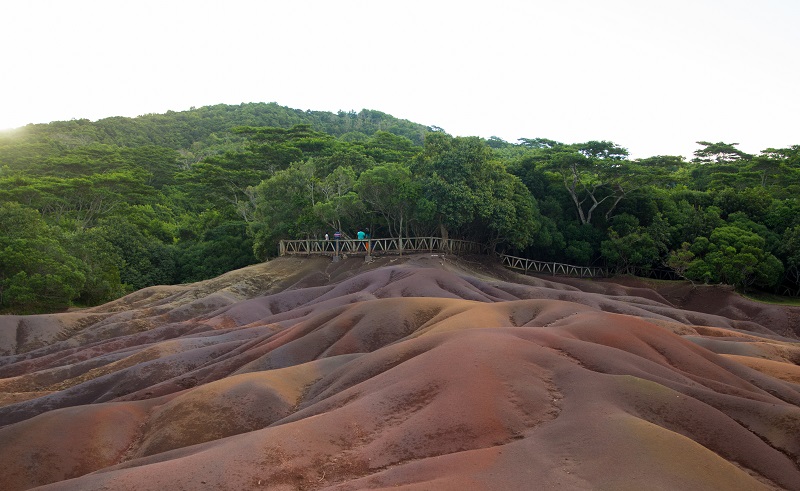 Finally, the beaches – it would not be possible to visit without at least a fleeting visit.

During our stay we were located at Sugar Beach – A Sun Resort, which offered great views and a relaxed, family-friendly atmosphere.

Both are located in Flic en Flac, the beach destination on the island.

With its white sand fringed with Casuarina trees, it is a popular location for weekend beach activities such as swimming and snorkelling, and also has a wide range of bungalows for rent.

When you’re done soaking up the sun there are a number of restaurants to choose from, and a lively nightlife.

When the moon is full, the starry sky is clear and the rain ‘walks’ over the ocean far on the horizon, you can see a tiny white moon-rainbow over the sea.

This is the place you have been dreaming of all your life.

To find out more about visiting Mauritius head over the official website.