Under the theme of ‘Harmonious Diversity,’ Japan aspires to convey feelings of appreciation—cherishing nature and remembering the many people involved in providing food at Expo Milano 2015.

The pavilion will deliver this message by providing visitors with the experience of a faraway journey of food, extending from production areas to the dining table.

The pavilion is split into a series of distinct sections:

Prologue: The front video screen will narrate the aioi (two tree trunks growing from one root) of people and nature.

Paintings and calligraphic works will express the country of Japan blessed by rain and the destruction/regeneration of the environment as caused by humans.

Lights and shadows, life and death, the various phenomena that seem to conflict yet cannot exist without the other shall be sculpted into Japanese language.

The walls on the left and right will resemble a series of Ukiyoe prints, a Japanese cultural asset that is familiar in Europe.

These will render the story “The Life of Rain,” tracing the abundant water that nurtures Japan’s soil over the course of four seasons.

The entrance will be like a picture scroll to represent the country of Japan where people and nature live hand in hand.

At the same time, it will serve to bring visitors into the world of the Japan Pavilion.

Harmony: Japan’s food production centres are respectful of nature and cultivate a rich variety of bounties.

Developed amid steep land and a climate of abundant rain and humidity, Japan’s paddies retain and cover the land surface with water, creating native soil that preserves rich vegetation and biodiversity.

This not only provides bounties of food for people, it also serves to control nature that sometimes brought harm such as floods and droughts.

The country will introduce this type of scheme as part of Japan’s agriculture, forestry, and fishing industry that coexists with nature, using the symbol of a stork that cannot make a habitat unless the rich ecosystem is maintained. 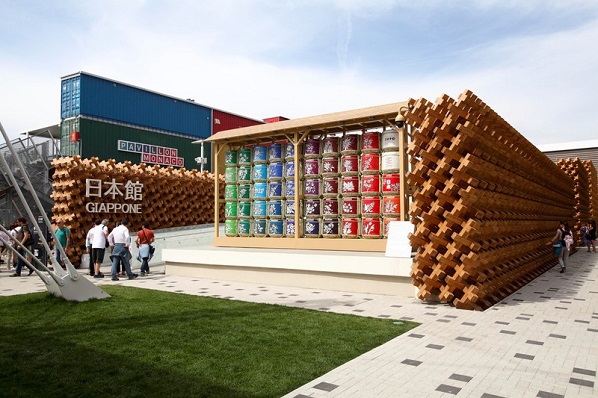 Diversity: The diversity and additional development of Japan’s agriculture, food, and food culture.

There is a great variety of agriculture in the world, with diverse food to match.

Similarly in Japan, unique agriculture, food, and food culture has been cultivated in the various regions according to weather and climate, with additional developments based on learning from the world.

In this zone, visitors will fully realize the diversity of Japan and the world by taking in an overview of more than 1000 content items related to agriculture, food, and food culture.

Legacy: Traditional wisdom and techniques that link to the future.

Japanese cuisine is food of the future.

One soup, three dishes; fermentation and sun-drying; soup stock and umami; seasoning in the mouth; varied food culture according to region and season.

Here the pavilion will appeal that the rich wisdom and techniques deeply ingrained in Japanese food since ancient times can become universal values and serve as food of the future, contributing to a healthy diet for people around the globe. 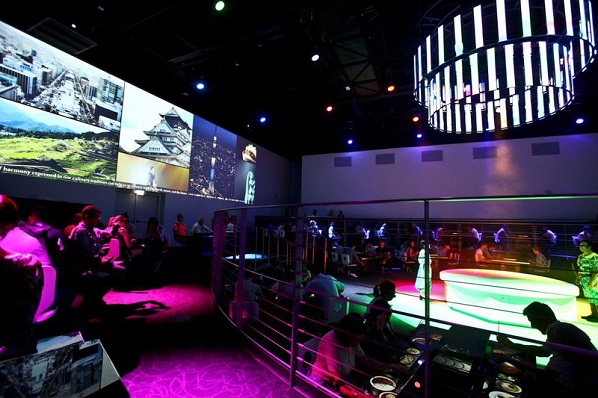 Here guests will examine Japan’s approach of mutual recognition and respect for the world’s variety of food production and diets while executing richly unique initiatives.

Of this, Japan will share issues of global scale such as agriculture/food standardisation, uneven food supply distribution, and nutritional imbalance.

As steps to resolve these, Japan will propose the establishment of cooperative associations based in the agriculture, forestry, and fisheries industry and local communities to improve lifestyles; the traditional Japanese diet with excellent nutritional balance; and sustainable agricultural production initiatives that coexist with nature.

Japan will also introduce international contributions of food and food production assistance that cross borders and advanced technology such as science and engineering that extend beyond the boundaries of disciplines.

Japan Showcase: The captivating cool Japan produced by tradition and innovation Ingredients of the four seasons and tableware according to cuisine play important roles in Japan’s food culture.

The shapes and designs of Japanese serving dishes, as well as the traditional techniques to create them, have been passed down through generations and are used every day as traditional crafts.

In this zone Japanese serving dishes with which the sensibilities of up-and-coming artists are rendered through artisan techniques cultivated through tradition.

Japan will also introduce ‘Cool Japan’ with fashion and entertainment such as manga and animation to convey the charms of Japan’s tradition, culture, and lifestyle to the world.

This zone is the lobby area for the Live Performance Theater.

In addition to theater guidance, the Japan Show Case will show videos introducing the charms of Japan, such as anime, fashion and other new lifestyle information, tourism resources throughout Japan, and traditional culture.

The exhibition will also introduce the latest technology tapped at the Japan Pavilion, as well as the newest agriculture and food technologies.

Performance Theatre: The sentiments and bonds between people that start from the dining table. Japanese food is a global food that connects to the world.

The words “itadakimasu” and “gochisosama” express gratitude toward all people involved in food as well as toward the bounties of nature.

With shows that create a sense of unity by actively engaging the audience, visitors will experience how Japanese food can be global, connecting people around the world with smiles.

The restaurant-style theatre wraps up the Japan Pavilion.

This arena theatre-style emphasizes that this is a dining space with a sense of solidarity, in contrast with the conventional theatre space where the audience faces front.

Dining table-style audience seats are arranged in an arc surrounding the centre stage, where cast members will perform according to the program.

These will bring a sense of unity through interaction via media tables surrounded by the audience, cast performances and large-screen video spatial presentations.

This will be a dynamic entertainment theater that actively engages the audience so that people from around the world can share sentiments, joy and smiles.