From investment deals to climate goals, cross-border collaboration to multi-national festivals, the first three months of Expo 2020 Dubai have seen a plethora of link-ups between countries, organisations and artists showing that the event is truly exemplifying its theme: Connecting Minds, Creating the Future.

The opening ceremony was an event in its own right.

In early October, Uganda signed business deals worth US$650 million while in the first two weeks of Expo 2020, Malaysia generated more than US$1.7 billion in agreements.

In October, the Brazilian state of São Paulo announced US$1.1 billion of new investment deals with the UAE and San Marino and Brazil signed a memorandum of understanding on tourism.

The United Arab Emirates’ golden jubilee celebrations in early December proved to be a boon for deals.

The Programme for People and Planet is convening global stakeholders to contribute expertise, content, and best practices to encourage international cooperation on the most pressing challenges in the world.

It has already hosted five theme weeks and sparked a raft of agreements and action-led pledges. 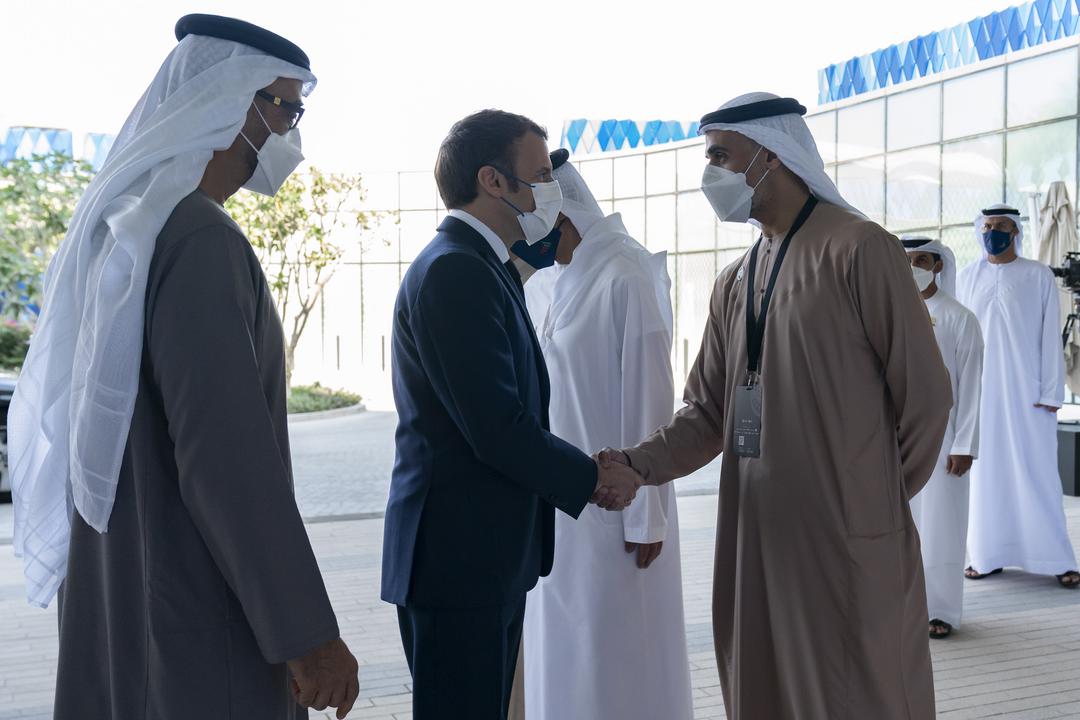 French president, Emmanuel Macron, was among the dignitaries to visit Expo 2020 earlier this year

Nadia Verjee, chief of Programme for People and Planet at Expo 2020 Dubai, said: “It has always been Expo’s purpose to connect minds to create a brighter future – a goal based on the belief that innovative solutions and progress are the result of people and ideas coming together in inspiring new ways.

“Expo has brought together change-makers from around the world – individuals and organisations who are working together to drive positive impact. We are thrilled to see so many tangible agreements so far, and look forward to many more collaborations, deals and alliances in the next three months.”

At Climate & Biodiversity Week from October 3-9, the UAE announced its Net Zero 2050 Strategic Initiative, which will see more than US$163 billion being invested in clean and renewable energy to meet the country’s mid-century target.

Staying with this theme, on November 22nd, the governments of Jordan, Israel and the UAE signed a landmark declaration, committing to building renewable electricity and water desalination capacity in the region to address the challenges posed by climate change and water scarcity.

Witnessing the signing, John Kerry, US special presidential envoy for climate, praised the deal, describing it as “a welcome example of how cooperation can accelerate the energy transition and build greater resilience to the impacts of climate change”. 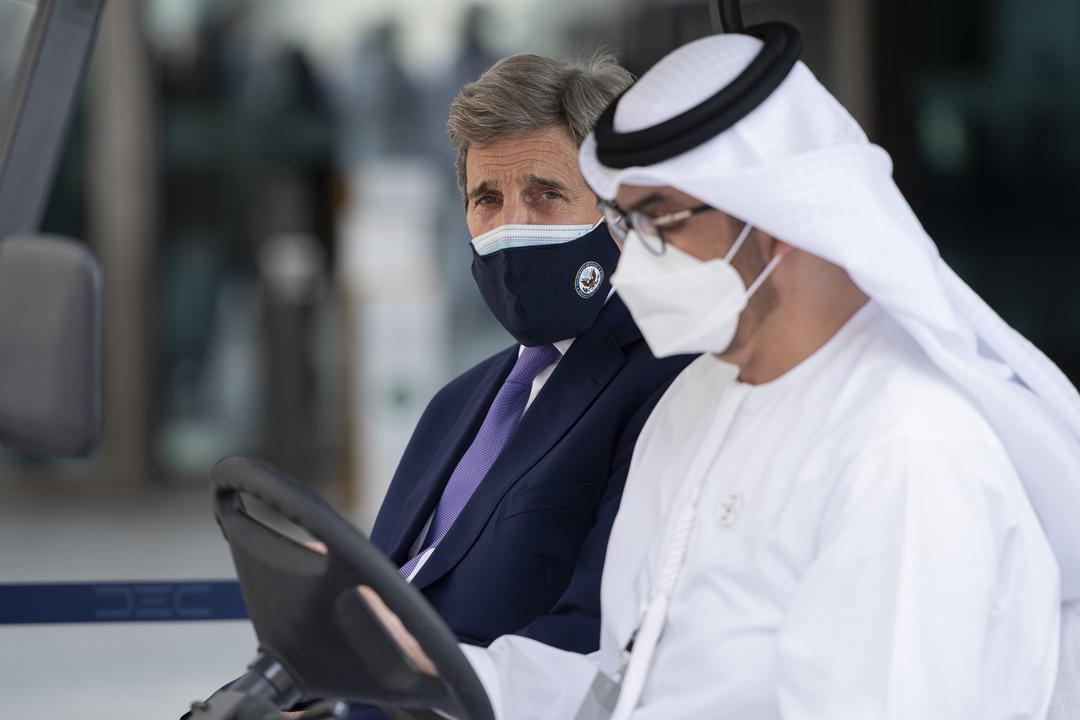 John Kerry, special US presidential envoy for climate, praised UAE efforts to get to new zero on a visit to Expo 2020

At Space Week, from October 17-23, the UAE Space Agency said it would work with strategic partners to develop programmes permitting private sector investment in space.

On October 20th, the UAE Space Agency signed a memorandum of understanding with the Israel Space Agency that could see the flags of both countries planted on the moon by 2024, and provide a framework for a mutually beneficial strategic partnership to strengthen efforts to gather and analyse scientific space data.

In addition, on October 19th, Curtin University and the UAE University revealed joint plans to develop the region’s first radio array observatory in Al Ain, through a strategic research-and-development collaboration between Australia and the UAE.

During Urban & Rural Development Week, from October 31-November 6, the UN unveiled the Last Mile Delivery Roadmap – a blueprint for an inclusive, localised approach to make informal settlements safe and sustainable.

In November, during Expo’s Tolerance & Inclusivity week, the Te Aratini, a Festival of Indigenous and Tribal Ideas was hosted, the first at a World Expo.

Expo 2020 also saw the opening of the Joint World Summit of Religions at the Italy Pavilion, which brought together scholars, clerics and intellectuals to promote dialogue between different religions. 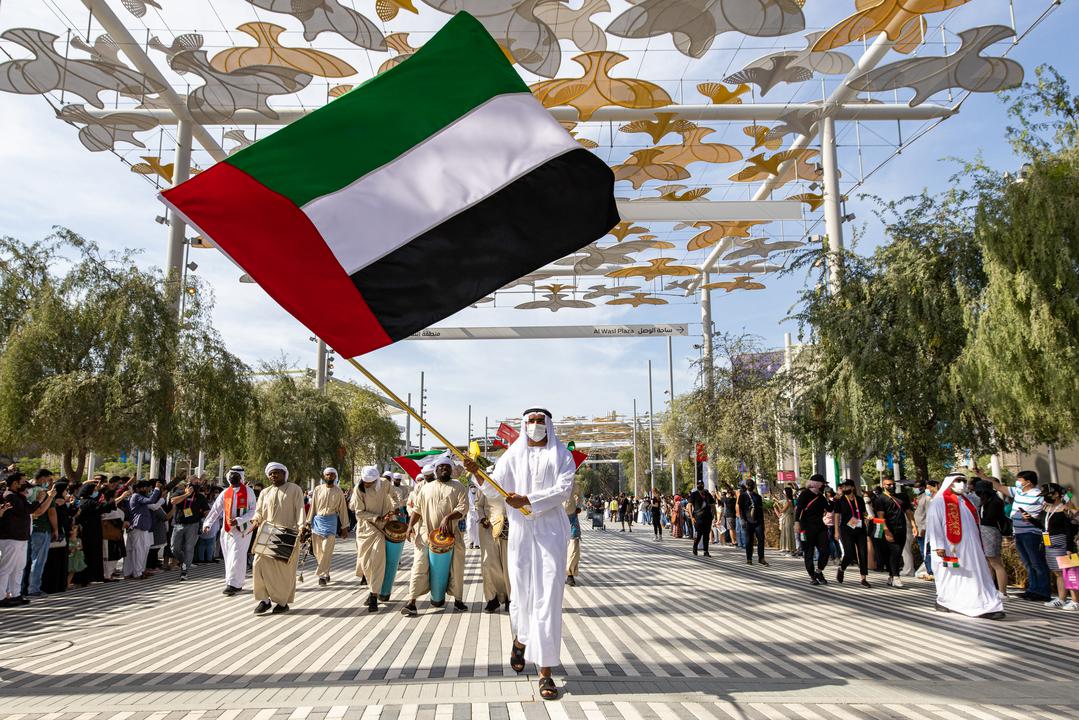 Expo’s most recent theme week – focusing on Knowledge & Learning and running from December 12-18– saw a number of education agreements.

Financing for education in 37 countries of the Organisation of Islamic Cooperation, worth half a billion dollars, was agreed at the RewirEd Summit hosted by Dubai Cares on December 14th.

Called the Smart Education Financing Initiative, the programme aims to assist 28 million children who are not in school.

Expo 2020 has also witnessed an array of artistic and cultural collaborations, from a cross-continent art exhibition between Malta and the UAE; a fashion week, organised by the Mexico Pavilion that showcased designs from around the world on runways in the pavilions of Israel, Switzerland, Thailand and the USA; and a Portuguese language festival that united performers from Portugal, Angola, Brazil, Mozambique, São Tomé and Príncipe and Timor-Leste.

The most inclusive and diverse World Expo ever, Expo 2020 runs for six months, with more fruitful collaborations expected before the event ends on March 31st.

So far more than seven million guests have passed through the turnstiles.

Take a look here as Breaking Travel News finds out more about what will happen to the Expo 2020 site when the doors close and plans for District 2020.

At Expo 2020 Dubai, you never know who you might run into.

Sports fans in particular have been in for a treat as the mega-event reaches its half-way point, with visits so far from some of the world’s biggest stars and a brand-new sports venue, opening in January, set to welcome many more sporting giants.

Earlier this month, Argentine footballer and Expo 2020 Dubai ambassador Lionel Messi – fresh from his recent move to Paris Saint-German, and also claiming his record seventh Ballon d’Or – told us what he thought of Expo.

“Something extraordinary… each pavilion has its own thing, its own place,” he said.

“It shows you its culture, its country, it makes you see and learn from each one of them. 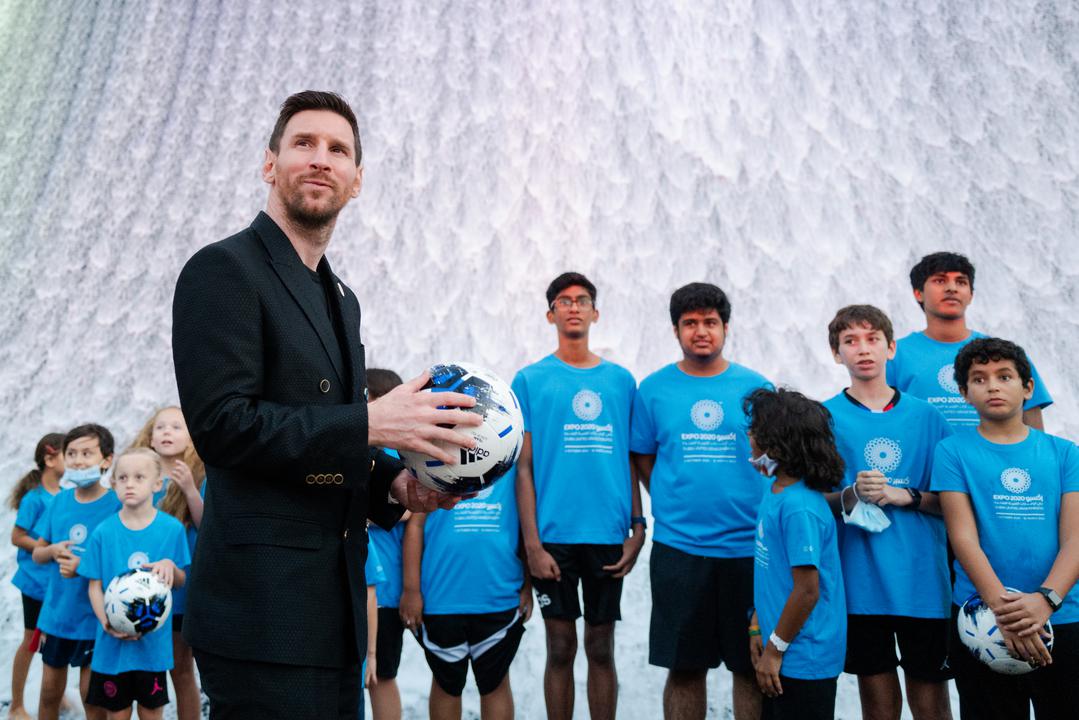 And from one of the best footballers in the world to the globe’s fastest man, Usain Bolt dropped in just weeks earlier to host a charity fun run.

The retired Jamaican sprinter is still the world record holder in the 100m, 200m and 4 x 100m relay, and echoed Expo’s message of using sport to bring people together.

“For me, just watching sports in general, and as a sports person, it’s massive,” he said.

“One example: in Jamaica, when the Olympics is going on, the crime goes down to zero… and when the World Cup is going on, everyone is watching.

“So I feel sport plays such a big part in helping the world come together.”

With state-of-the-art sports and fitness facilities, and coaching schools with the likes of AC Milan, Manchester City and the Rajasthan Royals, there is never a shortage of sporting names visiting the Expo site. 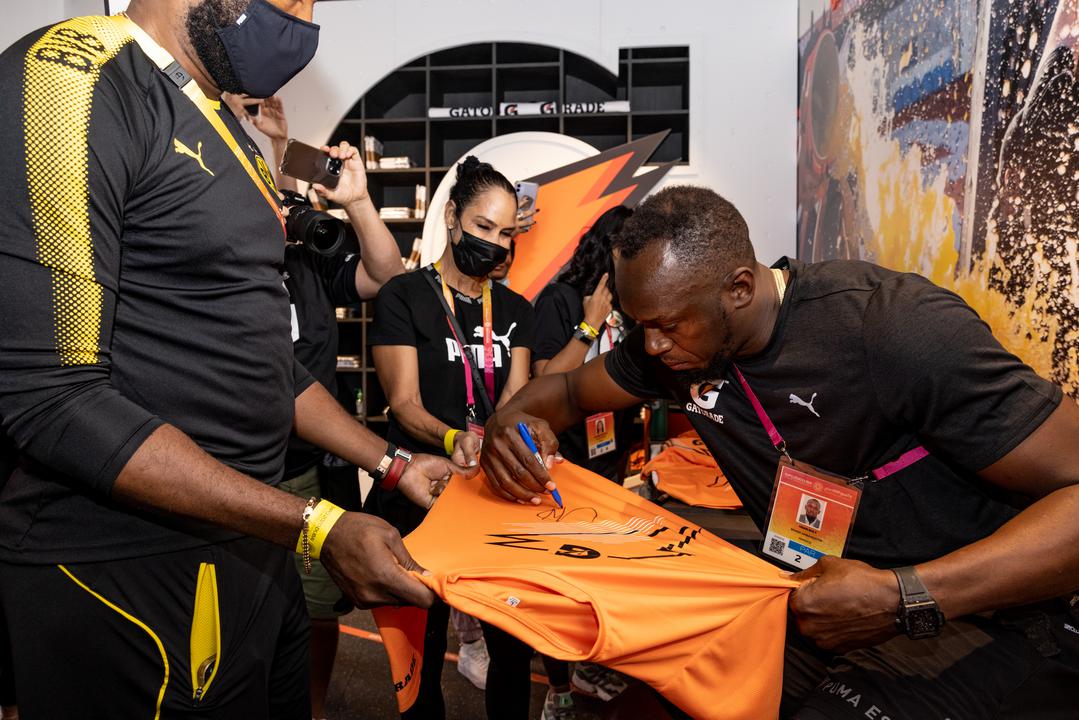 Usain Bolt wowed crowds during a visit to the Jamaica pavilion

Pep Guardiola, the manager of Manchester City, was very impressed during his own visit: “It’s been a wonderful experience to witness the energy of grassroots football here at Expo 2020 Dubai, and to see how the club connects with people around the world.

“The enthusiasm for the game demonstrated by the next generation of aspiring players is marvellous.” 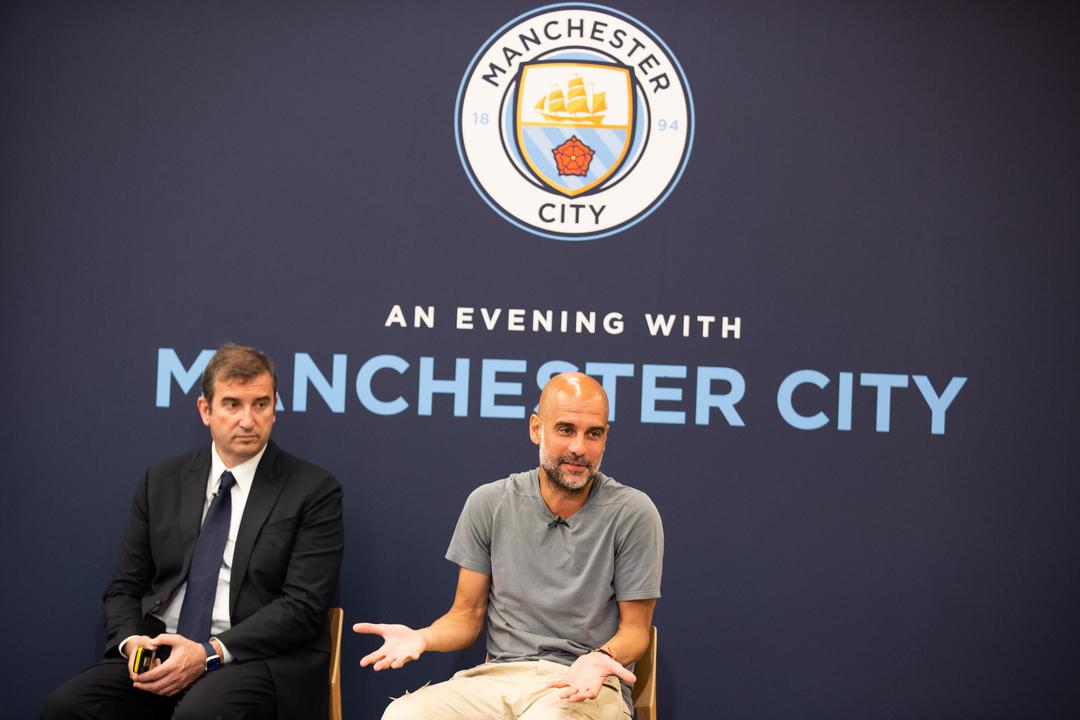 Talal Al Hashemi, national director of Special Olympics UAE, said: “Expo 2020 Dubai is quickly becoming a global platform to operationalise inclusion, in sports and in life, and to make sure that people of determination are empowered as we connect minds and create the future.”

Even basketball exhibition team the Harlem Globetrotters got to showcase their skills, while visitors got a glimpse of the Premier League trophy and the European Cup.

“I couldn’t grasp how big it was going to be, you have to see it to believe it,” she said.

“At the Emirates Pavilion, they showed me what aviation is going to look like in 50 years’ time, and how sustainability is going to be a big part of that. It’s all really exciting.”

So who else might be visiting over the remaining three months? With an even bigger sports venue opening on the Expo site in January, the question should be, which other sporting names can you think of?

A note of caution

As Covid-19 cases again begin to rise, the most significant global gathering of 2021 continues to welcome visitors safely and responsibly.

Throughout the Expo 2020 Dubai journey organisers have worked hard to balance between holding a responsible, safe, fun Expo and navigating a way through a pandemic.

Like the city and the country, Expo organisers say they have learnt how to live and operate effectively within a Covid-19 world, as long as they remain agile, factual and responsible.

Expo 2020 Dubai’s stringent Covid-19 safety measures are designed to protect everyone visiting and working on site; they include mask-wearing – indoors and outdoors – for visitors, staff and participants.

The health, safety, and wellbeing of everyone continues to be of the highest priority and we remain committed to working with our participants to welcome visitors to a safe, fun and exceptional Expo.

Head over to the official Expo 2020 website for more information on visiting the show.